The company Otillo are the inventors and originators of Swimrun.  Otillo Swimrun is usually spelled with an 'umlaut' above the letter 'O',  like this - "Ö". The two tiny dots above the letter O mean that it should be pronounced like OE - (almost like 'err') . The word Ötillö is Swedish for 'island to island'. It describes the sport in one word.

September 2022 - Ötillö has just released a 42-minute documentary about the 2022 Swimrun World Championship. Here is the official press release;

"Is it possible for veteran swimrunner Nicolas Remires to get super athlete Katie Knight ready for her first Swimrun ever in just one day?

When both their teammates get sick just before the race, former ÖTILLÖ Swimrun World Champions Ulrika Eriksson and Helena Sivertsson team up. Will they still be able to win?

Marcus Barton and Kawika Tarayao from the US have been training in Sweden for weeks before the race. They have set an ambitious goal for themselves – will they make it or break it?

Evelina Järvinen and Therese Bergling surprised both themselves and everyone else when they won the Silver Medal during ÖTILLÖ, The Swimrun World Championship last year. Was it just a lucky day or can they do it again?

Happy swimrunners Amy Bush and Trista Mennen earned their spot through Merit Points and are now faced with their biggest challenge ever. Will they be able to finish the race, or will the cut-offs stop their dream early?"

Watch the documentary below!

It is a story among many stories and a glimpse into what ÖTILLÖ, The Swimrun World Championship and swimrun is all about.

The first race that we would recognize as being a SwimRun event was the result of a drunken bet in a Stockholm bar. There were 4 people involved. They were the 2 Andersson brothers, Janne Lindberg, and Anders Malm.

On the table in front of them, the napkins had a map of the Stockholm archipelago - all the islands. At some point during the evening, one of the men wondered out loud if it might be possible to run and swim the length of the island chain - swimming from island to island, and running over each one to the next swim. 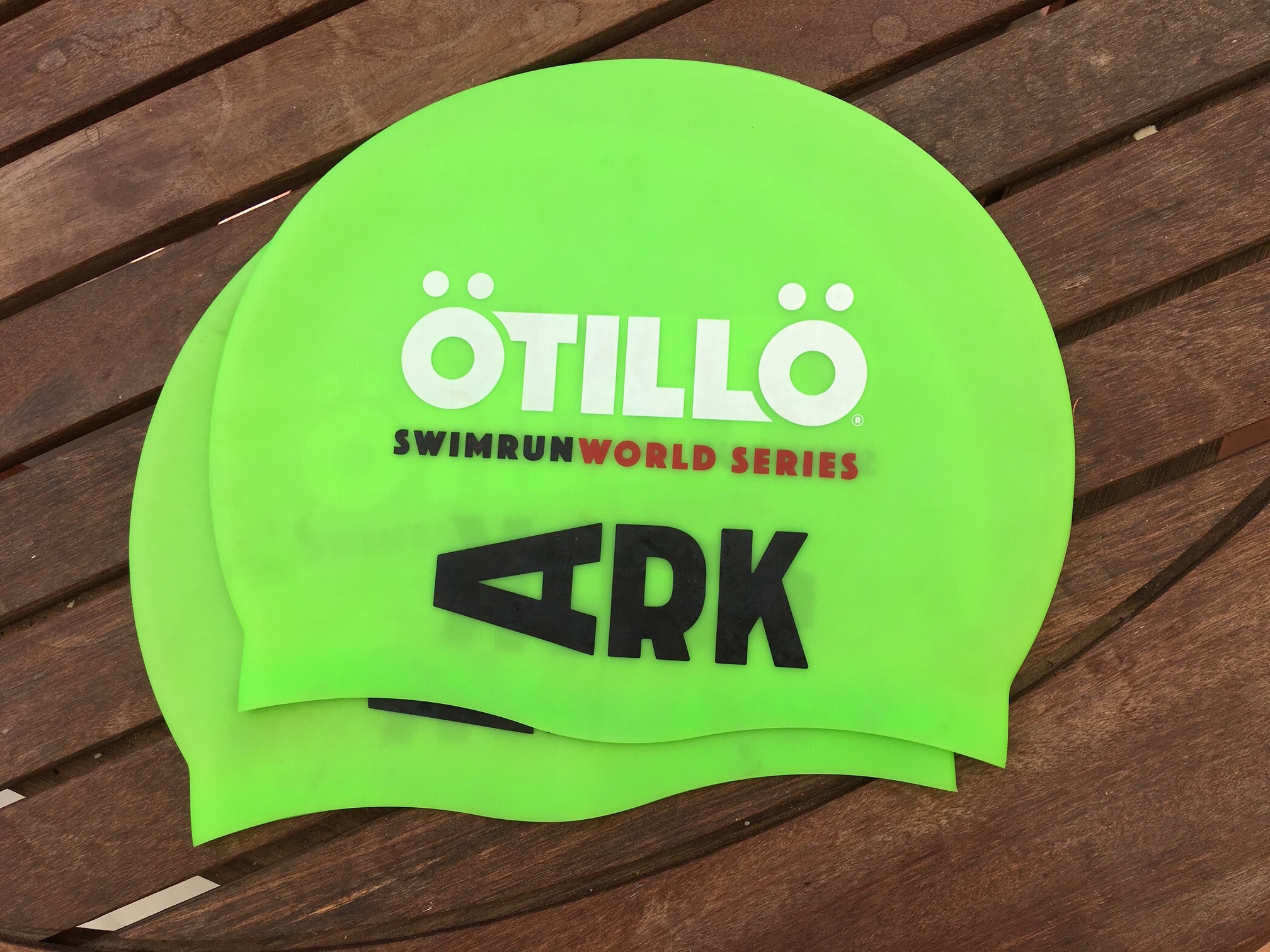 Our hats from Isles of Scilly World Series event 2019

Of course, everyone thought this was a crazy idea. Who on earth would want to swim in the freezing waters of the Sea, as well as running over the rocky islands too?

Well, with the assistance of some alcohol, a bet was made. They agreed to race each other, in teams of 2, across the islands and sea of the Stockholm archipelago. They had to check in at each of 3 restaurants en route, and the first team to arrive at each restaurant could eat and drink whatever they wanted, with the second team to arrive paying for it! 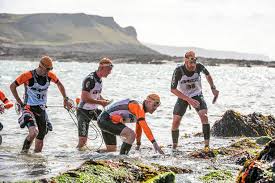 When they started the race, it took them 28 hours to finish, and they were too exhausted at the end to do any partying!

The following year they had the race again, with the same results.

In 2005, one of the original 4 had the idea to make a commercial (ie. proper) race event out of the crazy sport. They approached 2 experienced adventure racers, Michael Lemmel and Mats Skott, to ask if they thought it might be possible. 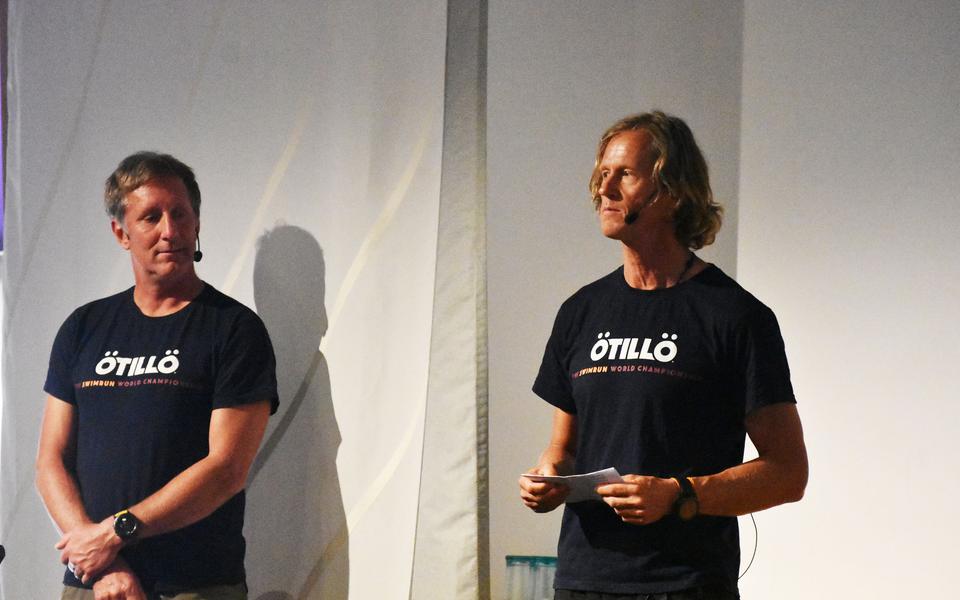 Mats and Michael thought it was not a good idea, and initially they did not want to get involved. However, after a period of time, they came around to the idea, and agreed to set up a series of events. At this time, the new sport did not have a name.

It was only after they had run a few events that one of their podium finishers, Erika Rosenbaum, came up with the name "SwimRun".  She simply said to Micheal -

"Hey, you should call this event a SwimRun!" -  and so the sport had its name.

Ötillö - (island to island) now had a name for the new sport. 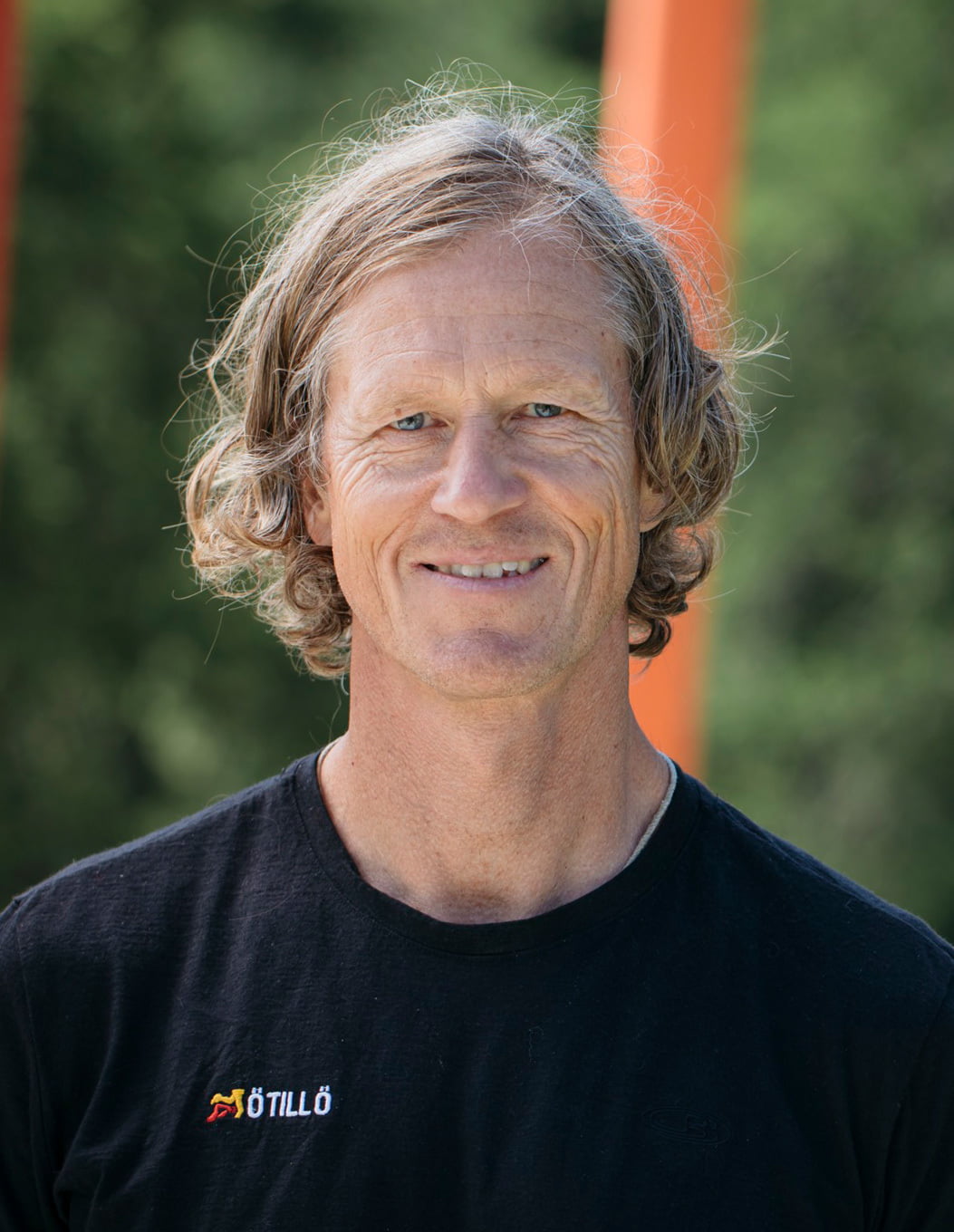 If you ever go to an Ötillö event, you will find that Michael Lemmel tends to take the stage more than Mats. Michael will do the introductions, the pre-race briefing, and will generally be more visible at the start and finish, and sometimes even around the course.

Mats Skott is less visible, and seems to operate in the background more. However, he sometimes pops up unexpectedly, such as at the post-race raffle in Engadin, Switzerland in 2017, where we won the 2nd prize! In the photo below, Mats is on the extreme right of the photo, and we are on the left. 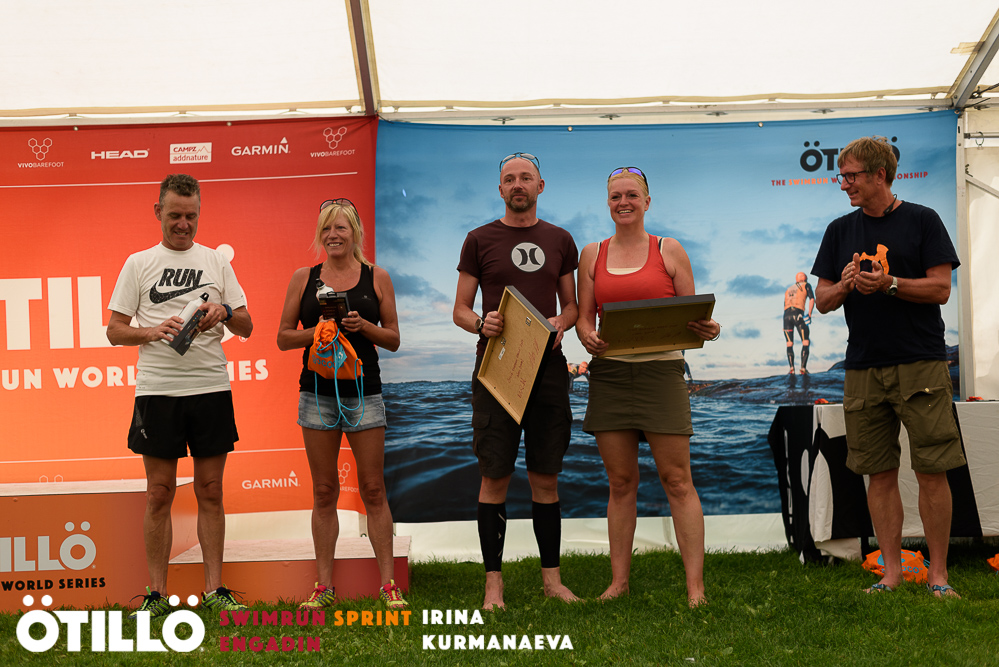 Raffle at Engadin - Mats Skott is on the extreme Right

Check out the video link below!

While course marking on Üto for the Final 15k Sprint CLICK HERE to see what the course markers found on the route!!

Check our race calendars for 2023 - European events are listed HERE, and for the USA and Rest of World click HERE.

This event was last held on 6th September 2021.  150 teams finished the race and 2 new course records were set in the Men's and Mixed categories.

The total distance was 75km, with 65km trail running and 10km swimming.  The event took place over and between the 24 islands between Sandhamn and Utö in the Stockholm archipelago.

The official film can be seen below.

We have done 4 SwimRun events, of which 3 were run by Ötillö.  There are a few things to note about the events run by Michael and Mats;

In short, Ötillö want to be seen as the Iron Man brand of SwimRun.  But there is competition. Various organisations are settingup their own versions of Swimrun events, such as Bologna SwimRun in Italy.

In the U.S.A., there is also the Ignite Swimrun  series, and the Odyssey Races.

In Canada, there is the Mudskipper SwimRun Challenge.

AND in the United Kingdom, there is new company setting up events all over the country - As Keen as Mustard SwimRun. Find an event near you!

In Spain and Portugal, the sports equipment company HEAD have set up their own HEAD SwimRun series, with various events scheduled for 2021.

If you are taking part in Ötillö Swimrun events and Merit events, you earn points towards their World Series. You can check your overall position HERE, the TSR ranking homepage.

As the first SwimRun company, Otillo deserve a special place - they invented a whole new sport!