If you've never heard of SwimRun before, you may be wondering "What IS SwimRun", and maybe even "Where did it come from, how did it start?" Some people spell it 'swim run' with two words, but the correct way is ONE word - Swimrun!

Swimrun is the fastest growing endurance sport in the world. You participate in teams of two, alternating between trail running and open water swimming along a marked swimrun course. But you don't get changed for each section - there's no time to lose – you run in your wetsuit and you swim in your shoes! And you carry a swim float called a pull buoy for the entire race. 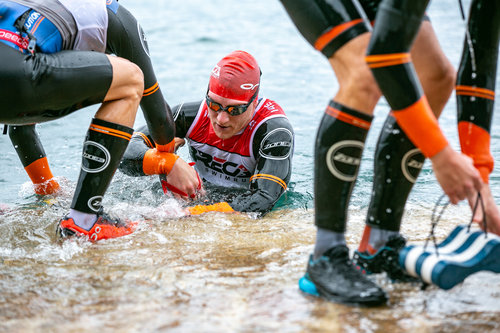 It is a unique sporting experience, as you always race with a partner, and the race courses are usually through beautiful but wild natural scenery. The ÖTILLÖ Swimrun World Championship (ÖTILLÖ meaning island to island in Swedish) is the original swimrun race, renowned as one of the toughest one-day races in the world.

NOW - let's answer the question of how it all started, which also goes a long way to explaining what the sport is all about.

What Is Swim Run?

There is a very short version of the story at the official Ötillö website, but there's much more to it than that. If you've ever been to an Ötillö swimrun event, you'll know that the organisers Michael Lemmel and Mats Skott explain the full story, for the benefit of newcomers. 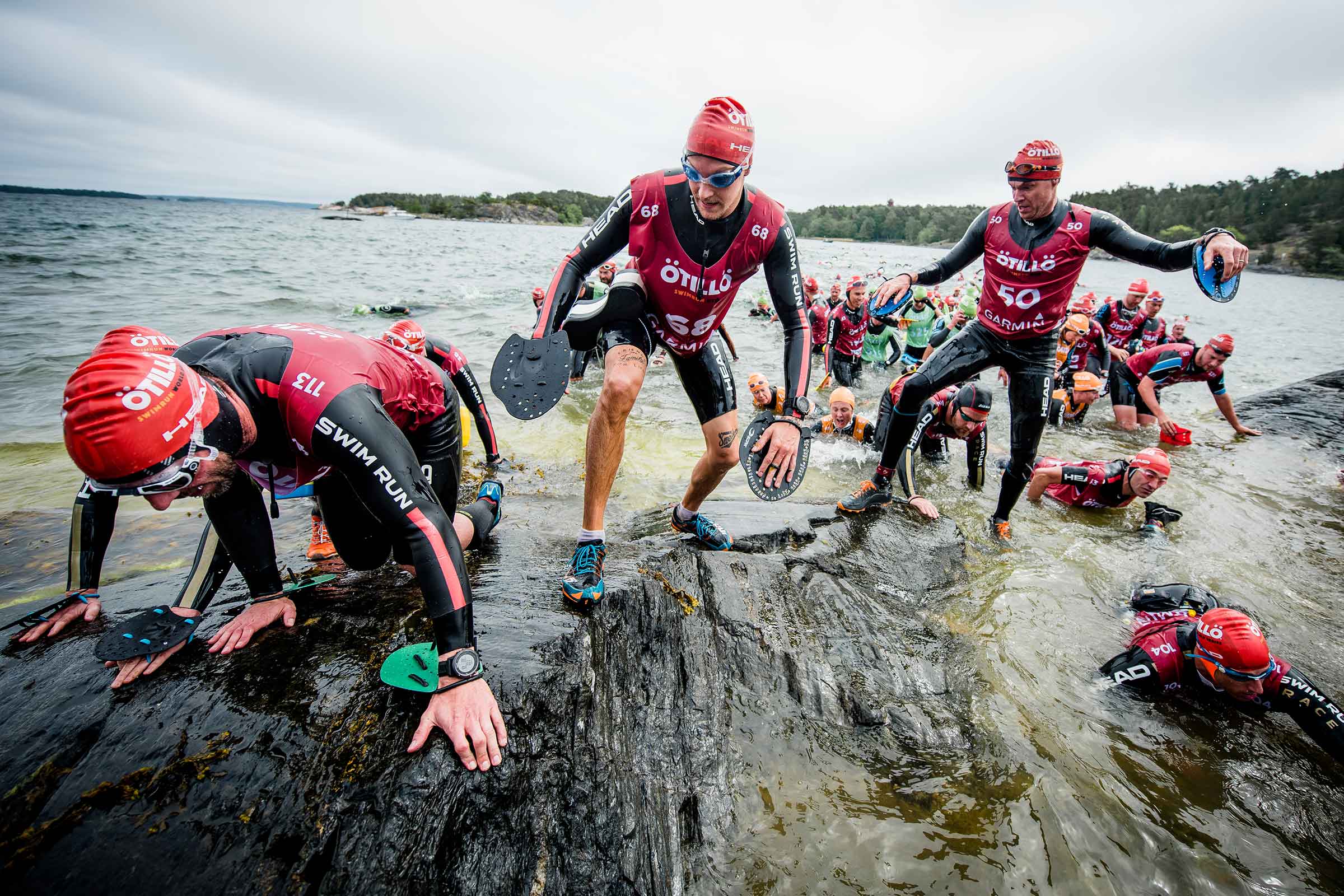 Swimrun has its origin in a drunken bet in a bar in Stockholm, in 2002, overlooking the Stockholm archipelago. That is the scattering of many islands in the sea off Stockholm.

Late one evening, four Swedish gentlemen were enjoying a drink - or several.

They were Anders Malm, Janne Lindberg, and the 2 Andersson brothers.

On the table in front of them, the napkins had a map of the 75km Stockholm archipelago - all the islands. At some point during the evening, one of the men wondered out loud if it might be possible to run and swim the length of the island chain - swimming from island to island, and running over each one to the next swim. The total distance was 75km, of which 10km was swimming.

Of course, everyone thought this was a crazy idea. Who on earth would want to swim in the freezing waters of the Sea, as well as running over the rocky islands too?

Well, with the assistance of some alcohol, a bet was made. They agreed to race each other, in teams of 2, across the islands and sea of the Stockholm archipelago. They had to check in at each of 3 restaurants en route, and the first team to arrive at each restaurant could eat and drink whatever they wanted, with the second team to arrive paying for it! 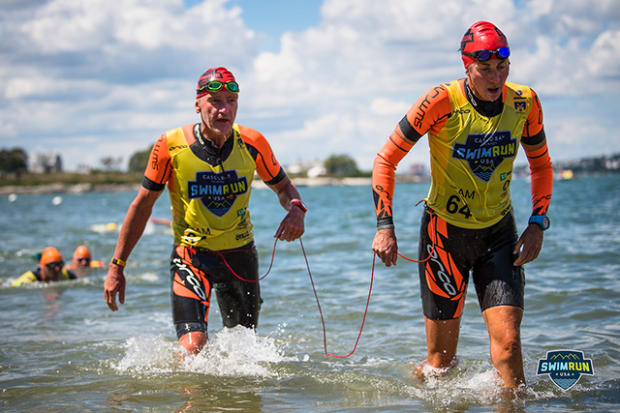 What Is SwimRun? - The first ever race day

The following year they had the race again, with the same results.

In 2005, one of the original 4 had the idea to make a commercial (ie. proper) race event out of the crazy sport. They approached 2 experienced adventure racers, Michael Lemmel and Mats Skott, to ask if they thought it might be possible.

At first, Michael and Mats had doubts. They didn't really want to get involved. BUT after giving it some thought, they decided to give it a go. They set up a small company to run events, which they called  Ötillö - which means "Island to island" in Swedish - But they didn't have an official name for the crazy new sport.

It was only after they had run a few events that one of their podium finishers, Erika Rosenbaum, came up with the name "SwimRun". She simply said to Michael -

"Hey Michael, you should call this event a SwimRun!" -  and so the sport had its name.

True to the original race in Stockholm, the modern SwimRun race is a team event of 2 persons, racing together. They must always remain within 10 meters of each other, and must help each other through the tough challenges, and enjoy the beauty of the environment of the race together. Most teams use a tether or bungee cord

UPDATE - from 2019 onwards, many races became available as solo races, in particular the shorter Sprint or Experience races.

Swimrun rules are fairly relaxed - you can wear any design of wetsuit that you want; you can use hand paddles to help you on the swim legs; you can use a  pull buoy on the swim sections. But whatever equipment you start with, you also have to carry for the entire race. So you don't want to carry anything too bulky that may slow you down on the run legs. Most of the running involves steep ascents and descents on trails!

In fact, the Ötillö events are so heavily directed at Adventure Racing that we would only recommend Ötillö events if you are a good trail runner. You MUST be good at running over boulders, rocks, and rough trails if you want to avoid being at the back of the field!

Race distances vary from around 1 km for "Experience" or intro events all the way up to over 70 km. We strongly recommend avoiding the longer distances at first. When you stand on the start line for the first time, you want to be confident that you can reach the finish line!

Over the years, some competitors have turned up with an extreme solution of some sort, which gave them such a huge advantage that it was subsequently banned!

Quite early on, one team appeared with a large inflatable airbed in the shape of a mobile phone, from the company Nokia. This was very light to carry on the running legs, and the team climbed onto it for the swim legs, aided by a following wind! After that, flotation devices were limited in size to a maximum of 90cm x 70cm.

A few years afterwards, some teams raced with very long diving fins to help them in the swim sections. Again, this was outlawed afterwards. You can still use small swim fins, but the limit is 15cm from the toes to the tip of the fin. Not many people use them! 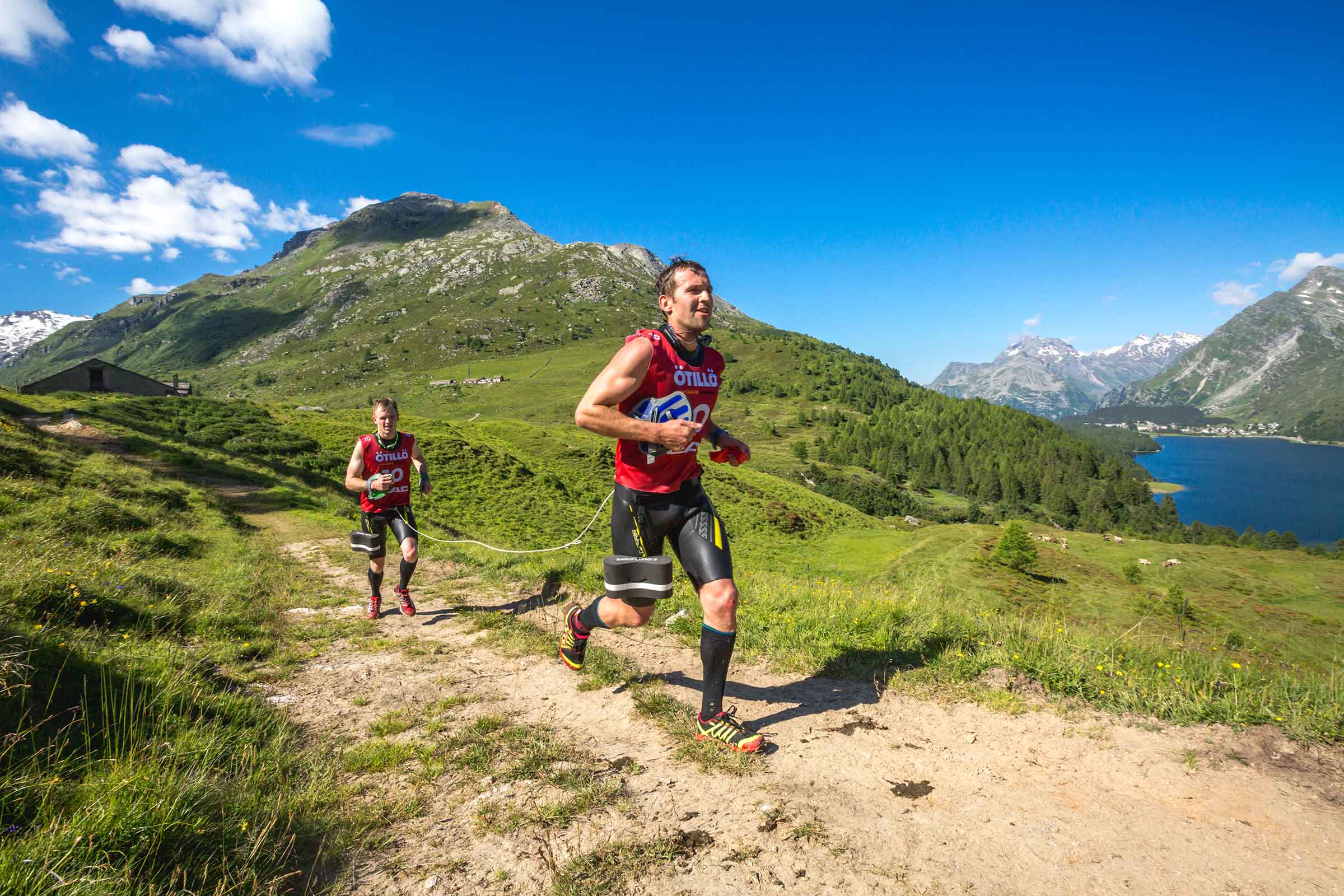 What Is Swim Run? - Swimrun Equipment

During swimrun races you will always wear a swim cap and a race vest, both provided by the race organizer. As well as Otillo, other big event organizers include Odyssey Swimrun and Breca Swimrun.

Swim paddles or hand paddles can be any size, but the bigger they are the more tired you will become in the later swims. It's a trade-off.

Most racers now use a small swim buoy between their thighs to help them rest their legs on the swim sections, tucking them into their belts on the running sections.

Teams are allowed to be joined by a tether, often called a tow-rope. This is most commonly used on the swims, where the stronger swimmer can give some help to the slower swimmer. It's also a safety feature when swimming in strong seas and currents!

Some teams remain tethered on the run sections too, but it's less common because it's easier to get tangled up in the tow-rope when running.

The tow-rope itself is usually elasticated, to allow some "give" in the rope, and attached to each racer by special clips called Karabiners. They are also used by rock-climbers and mountaineers. They need to be big enough to manipulate with freezing cold hands!

The longer SwimRun events (anything over 3 hours) have a reputation for being among the hardest single-day endurance events on the planet. What makes it so hard? There are a couple of factors that conspire against you!

1. The temperatures you experience. For most events, you will be swimming in relatively cold water - between 8 degrees Celcius to 12 degrees Celcius is not uncommon. This is COLD for the length of time you are in the water, and you will be doing it 6 to 8 times. The cold starts to sap your strength, as your body tries to burn calories to generate heat.

2. That wetsuit. Running in a wetsuit may not seem like much of a challenge at first. And, for shorter events, it's not too bad. But the wetsuit hampers you in several ways.

First, if the air temperature is warm, you get hot very quickly.

Second, any neoprene around your knees will make running difficult - you have to cut your wetsuit legs off just above the knee.

Third, and worst of all, after a swim section, your wetsuit will weigh several kilos.

After several hours of racing, the fatigue becomes accumulative. And fourth, the sheer body-hugging fit of the wetsuit acts like a resistance suit. It's like trying to run through molasses! Swimrun-specific wetsuits usually have a front zip and sometimes a rear zip too, which helps when you want to take the top down for a longer run when it gets hot.

3. Swimming in your shoes - this doesn't slow you down too much while swimming, but those wet shoes are like running with a 1kg weight on each foot! After a few hours, the fatigue builds. And it continues to build.

4. The rocky entry and exit areas, especially in Ötillö events. There are no transition areas as such, just a marked spot to enter and exit the water. If Michael and Mats can find a tough entry or exit area, near to an easier area, they will ALWAYS pick the tough one! For Ötillö, it's not enough to just do the distance, to swim in freezing waters against tidal currents, to run through steep trails. They ALWAYS find the toughest entries and exits, to drain your energy as much as possible!

SO, there are several factors that contribute to SwimRun events over 3 hours becoming more and more fatiguing. It is as if the energy is being gradually drained out of you. Much more draining than a marathon! There is also a small but real risk of picking up an injury during training and racing.  Read about SwimRun Injuries HERE.

We have written a page about SwimRun on a Budget for people new to the sport, who want to try  it out with decent equipment, without spending much cash. You can read more about all the equipment you might need HERE.

Below is a video taken from the Breca website which gives a guide to 'What is SwimRun?' and is filmed at Lake Wanaka in New Zealand - it's good to watch!  Unfortunately Breca has gone bust, but the video is still great.

I hope this guide to 'What Is SwimRun' has been interesting and fun!