The Disney marathon weekend usually takes place in early - to - mid January each year. As Florida is quite far south, and normally has mild air temperatures at this time of year, you would think it's a good bet for a warm run - but the year Mogsy ran, it was unseasonably cold, and most runners had not brought any cool-weather running clothing! So our first tip here is to always take enough running gear to give you options, depending on race-day temperatures! 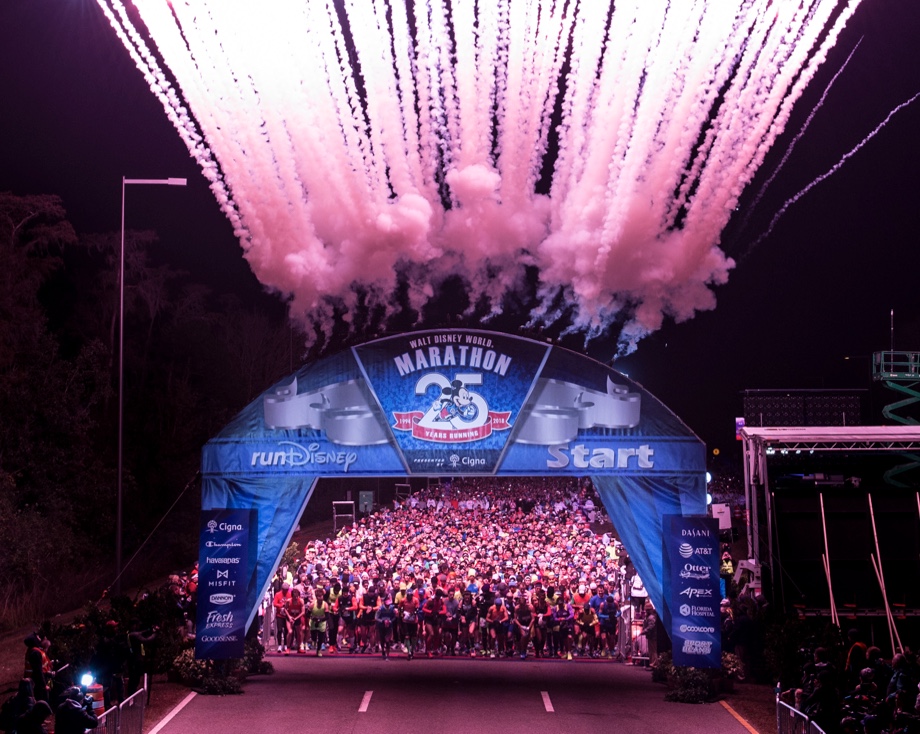 This depends on how many races you enter - there are 4;

You may be happy just doing the 5km or the 10km race, depending where you're at in your training. But most people will want to take on a bigger challenge.

You also get a participant shirt for EACH race and EACH challenge!

Here are Mogsy's medals for the Race and a Half Challenge in 2010, which was the 5th anniversary of the event. 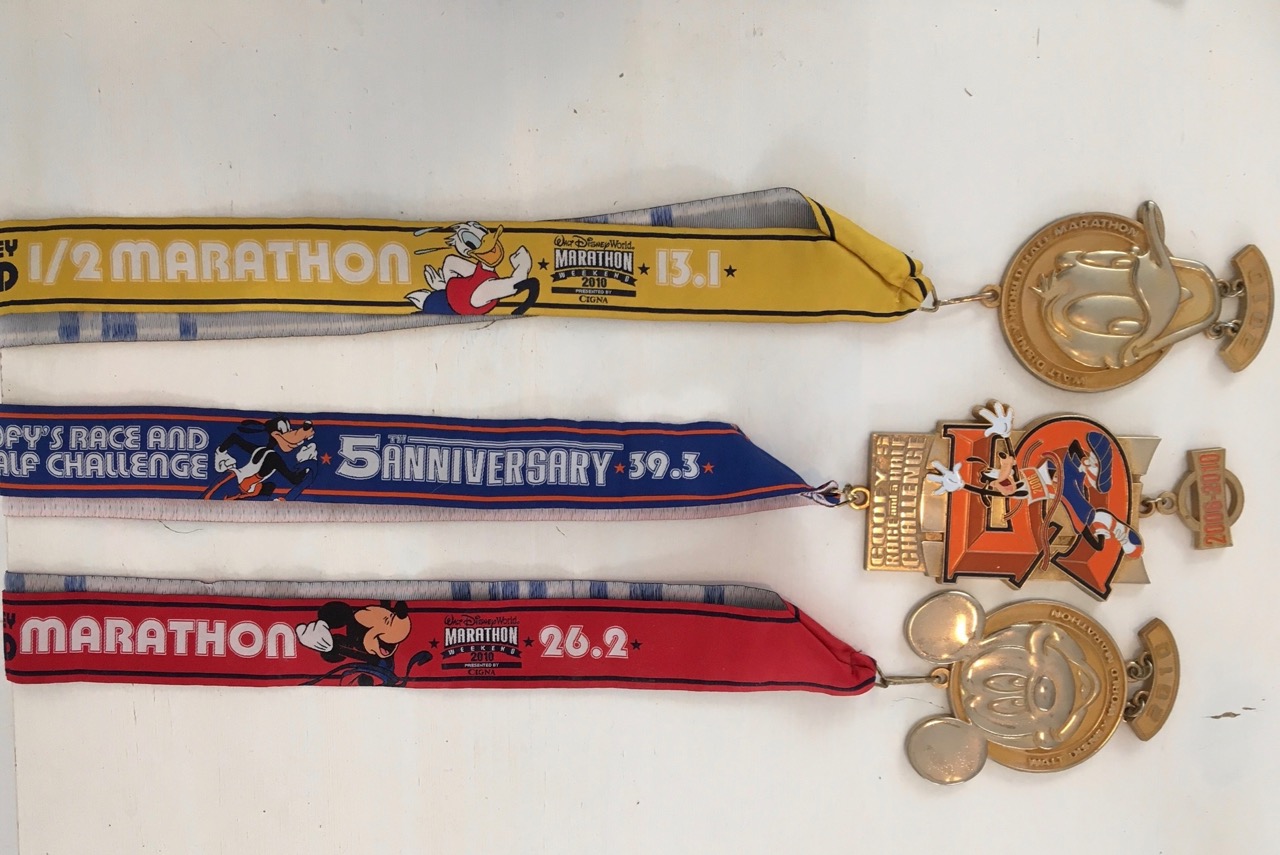 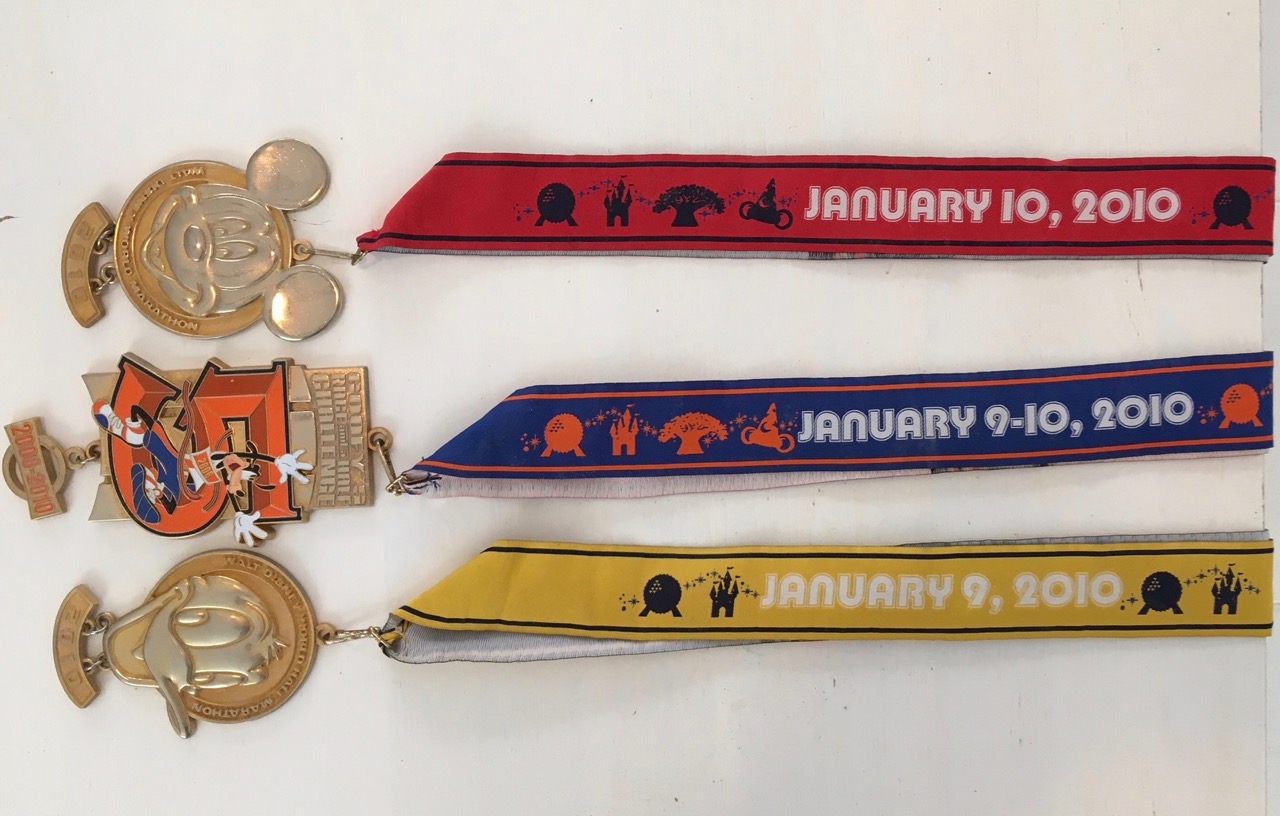 Disney Marathon Race Review - getting there

For most people, the point of entry into Florida will be Orlando International Airport (code MCO), just 6 miles south-east of downtown Orlando. This is a MAJOR airport, the busiest in Florida and the 10th busiest in the USA.

From Orlando airport you can get a taxi to your accommodation either just outside of Disney World, or at one of the resort hotels within the complex.

There are 2 basic options; you can stay inside the Walt Disney World park, which is convenient but expensive, OR you can find accommodation just outside the park, and get a taxi to near the start on race day.

Obviously you have the extra cost of the taxi ride, in both directions, but if there are 3 or 4 runners in your group to share the cost, it works out cheaper to stay outside the park. You will be able to find your accommodation options on well-known sites such as AirBnB, Booking.com, or Trivago, for example.

If you DO stay at a Walt Disney World resort, there is transportation to the start included in your accommodation. There are over 25 uniquely themed resort hotels, so there's plenty of choice! 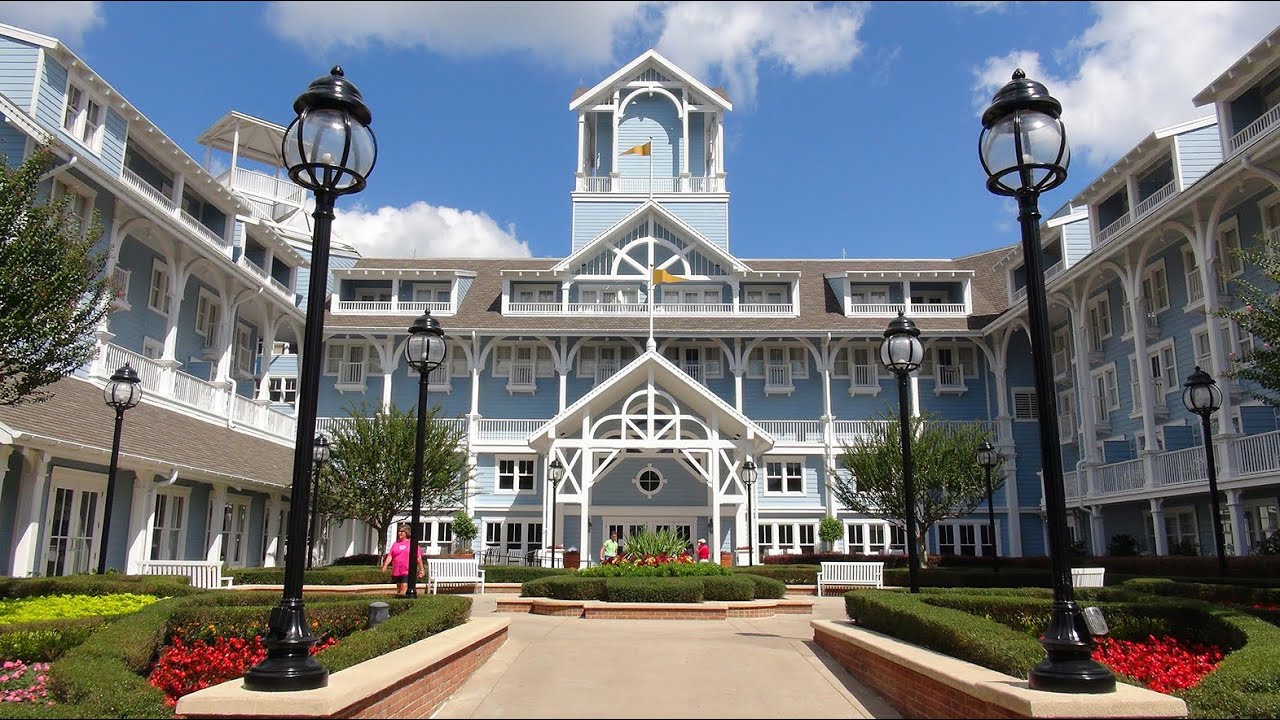 Race Expo & Picking Up Your Number

This is officially called the runDisney Health & Fitness expo, and this is where you pick up your race bib (race number). You need a valid photo ID, such as driver's license, passport, military ID or government issued ID. There are no exceptions, and the organizers enforce this policy 100%.

Of course, there is also the opportunity to buy runDisney items, and themed merchandise such as hats, T-shirts, footwear, sunglasses etc., as well as appropriately themed food and drink choices. 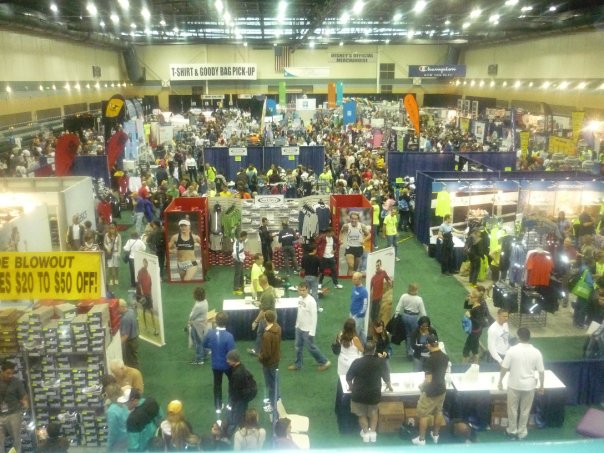 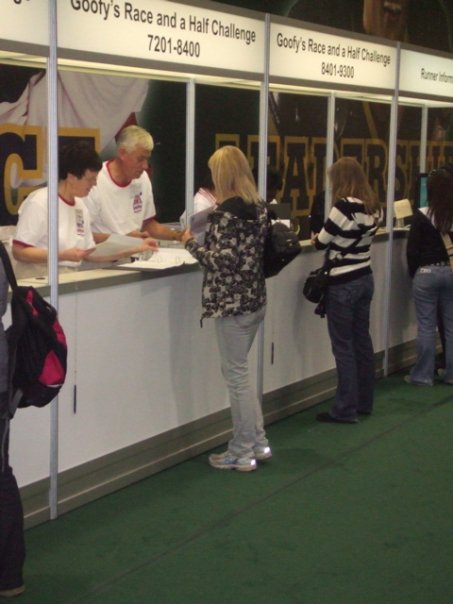 Mogsy picking up her number at the Expo in 2010 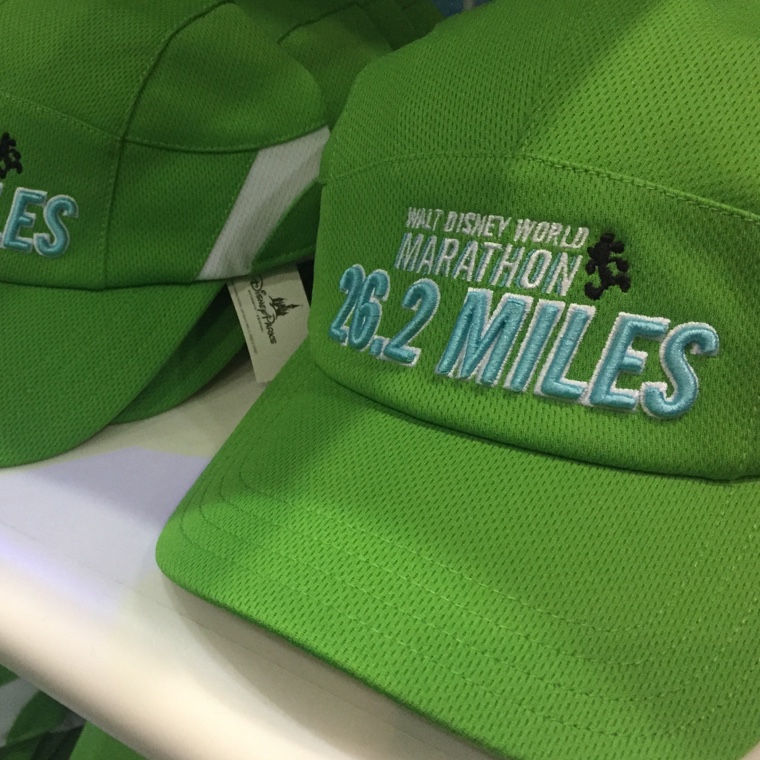 A runDisney hat at the current expo

All events start at 5.30am - EXCEPT for the Marathon on Sunday, which starts 30 minutes earlier, at 5.00am. You need to be in the correct corral (start area) for your estimated run time at least 30 minutes before the start.

You will need to provide evidence of your best time if you want to start in the corrals towards the front of the start area. You can read the requirements at the official runDisney website HERE.

When Mogsy did the event back in 2010, the start process was well organized and slick. The only problem was the lower than expected temperatures, with flakes of snow falling at the start!

Being from the UK Mogsy didn't find it 'really' snowing - her plane had only just made it out of London due to the snow drifts there!!! But it was super cold and the organisers gave everybody white thermal poncho outfits which was great.

There was music blaring out (I gotta Feeling - Black Eyed Peas - that always reminds Mogsy of the Disney Marathon!) and people being interviewed at the start - a great atmosphere and fireworks on the gun!

The Marathon course takes you through all 4 Walt Disney World theme parks and the ESPN Wide World of Sports complex. While the theme parks are fun and interesting, the route between each one is simply highway, which on the one hand is smooth and flat, but on the other hand is simply boring.  Take your music or a friend to chat to on the roads between the parks.

Be prepared to meet all the Disney characters along the way and have a little stop if you want!! People queue to have their photo taken with Mickey Mouse, Donald Duck and many others!

There are lots of food stations and many medical tents too - Mogsy had an achilles problem for the marathon and remembers stopping at nearly every mile to have ice spray put on - a huge help!!

The Half Marathon, 10km and 5km races take you through the Walt Disney World Resort, the highlight (for many!) being running through the Disney Castle near the finish.

Not many bad points, to be honest, and I've already mentioned them;

The Disney Marathon race weekend is actually a 4 day running festival, giving you the options to race at any or all of the distances on offer. You may decide to just do the 10km race on the Friday and the Marathon on the Sunday, for example. The choice is yours. And then there are the Race and a Half and the Dopey Challenges, if you really want to stretch your legs!

It's a fun weekend - from Thursday to Sunday - with lots of runners taking part in costume. You can't help but be caught up in the energy and the excitement! But it's at a price. Particularly if you are doing the longer distances and/or the Challenges, it's relatively expensive.

But there are not many opportunities in the running and SwimRun worlds to do several race distances at one long weekend; normally you have to choose just the one distance from several on offer.

In SwimRun, many organizers now stage the shorter races (ie. the Ötillö sprints) on the Saturday, and the full-distance race on the Sunday, making it possible to do 2 races on one weekend.

At runDisney you can do ALL the distances you want to. And for some people, that's the attraction.

We hope this Disney Marathon race review has been useful -  Please send us any comments here or your own personal experiences!