Here's our Honolulu marathon race review, which is held in December each year. This was the first marathon I had ever done, and it took place on my 58th birthday. We did the 2014 event.

The idea of running in a marathon was my first attempt at endurance sport. This was several years before I had even heard of SwimRun! So why look at doing a marathon in the first place? And why pick one so far from Europe, where we live? 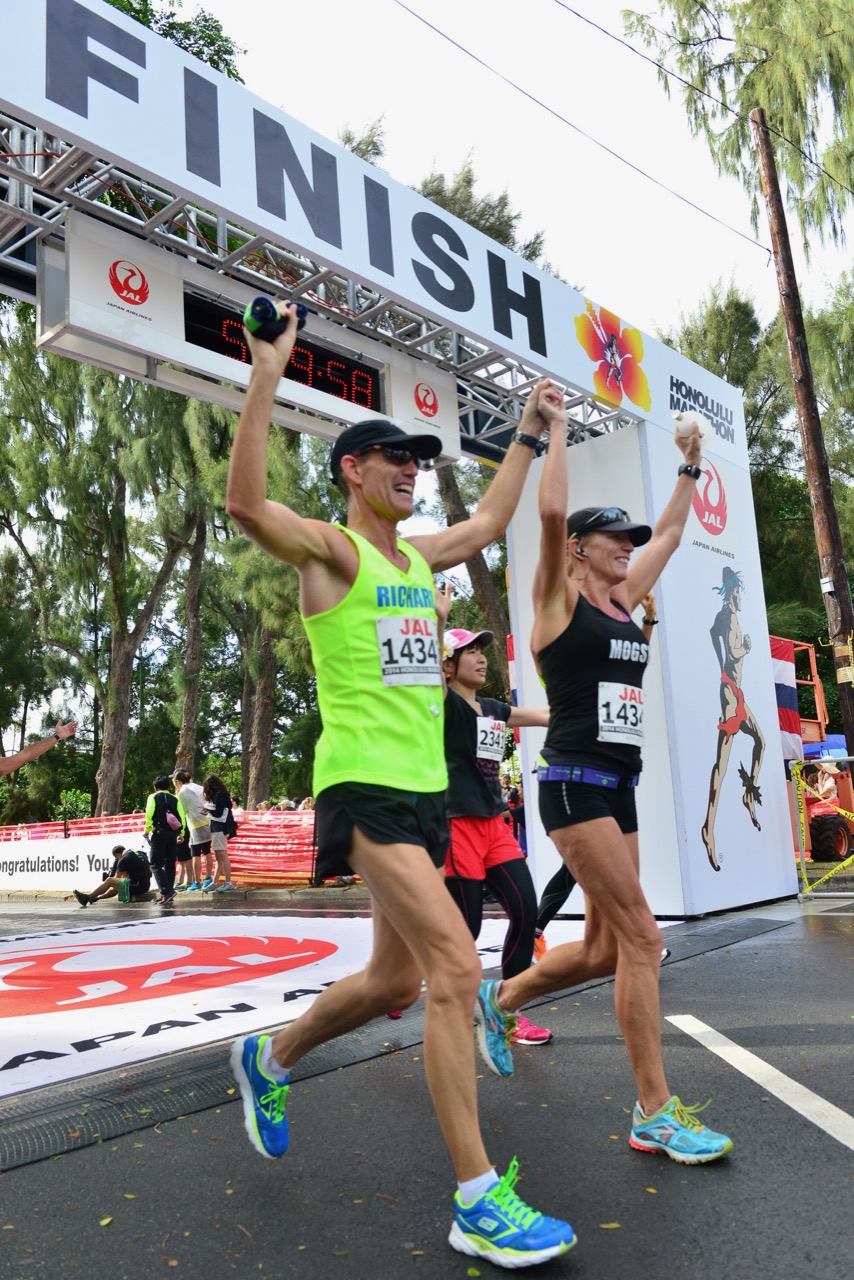 Before I met her, Mogsy had run several marathons, including New York, London, and Disney in Florida. She was determined to get me into a marathon, and so after some 10km events and 2 Half marathons, we agreed to find a race to enter. Once we started looking around online, we found it was not easy to find a marathon that was somewhere warm, relatively flat, and in a place we both wanted to visit.

We gradually worked our way through a list, and when I found the Honolulu event, scheduled for my birthday in 2014, we decided to enter. It felt like a huge step!

The entry procedure online was quite easy, and the event itself wasn't as expensive as most city marathons. So far, so good. At this stage, the organization seemed fine.

Accommodation in Honolulu was also not difficult to find. I decided to find somewhere on AirBnB, and we were fortunate to stay with a local couple out of the city, but with great views over Honolulu - especially at sunset. There was also the important factor (for us) of a hot tub (jacuzzi) to help our tired legs after all that running! The hot tub was actually built into a huge old wine barrel.

Getting to Hawaii was a long trip from our base in Spain. We flew up from Alicante to Barcelona, stayed overnight in the airport hotel, then caught the red-eye from Barcelona to Frankfurt in Germany.

Here we connected with Lufthansa for the LONG flight to Vancouver, Canada. After a 7-hour stopover at Vancouver airport (where we also cleared US customs and immigration), we were on to an Air Canada Rouge flight down to Honolulu. A total of 4 flights over 40 hours.

This was certainly a roundabout way to do it, but it was CHEAP!  Looking back, it probably wasn't the best way to travel 2 days before running a marathon with 10 hours of jet-lag. If I were to do this event again, I would spend a few hundred dollars more for more direct flights, and get there 3-4 days beforehand to acclimatize.

On the day before the race (which was the day after we arrived!) we went into downtown Honolulu to collect our race numbers and information. The whole procedure was very organized and very slick. The race expo was big and had a lot of stalls and exhibitors. 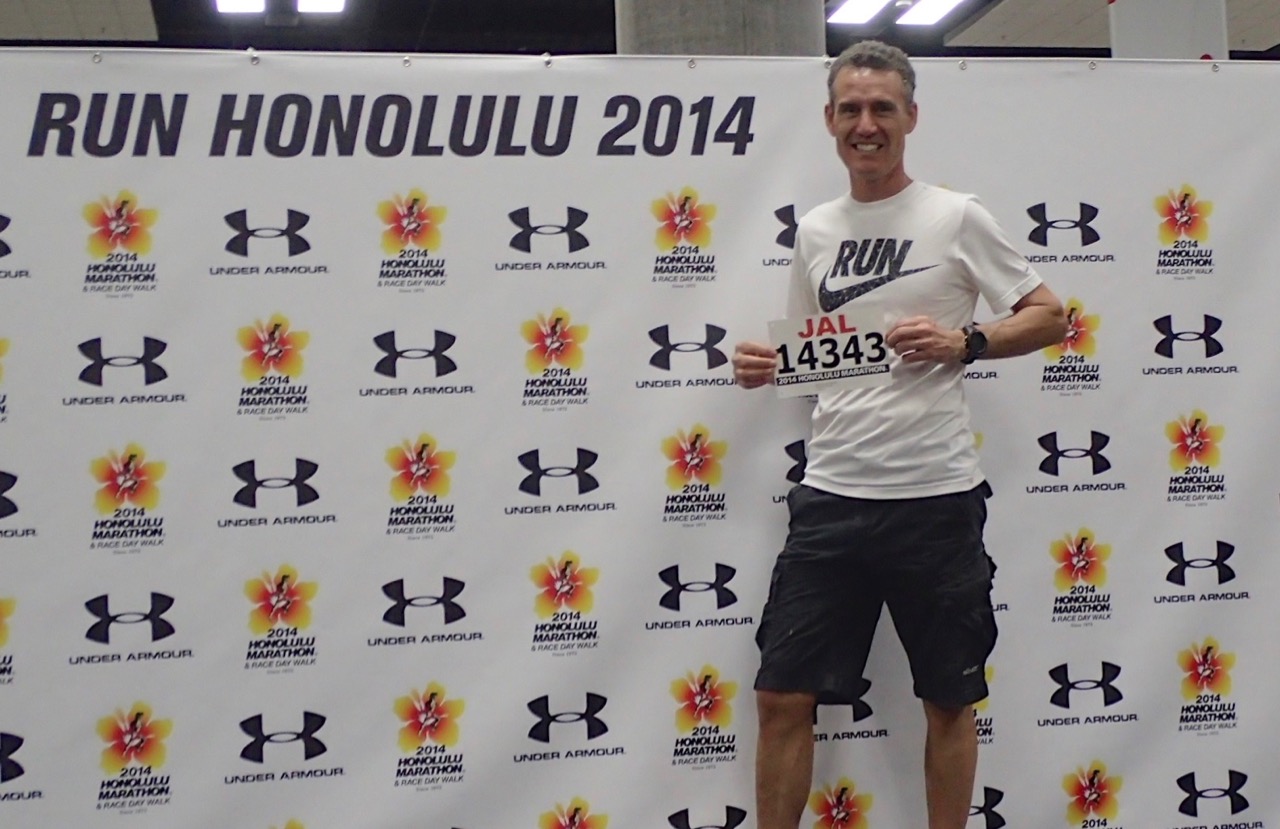 With race number, inside the Expo 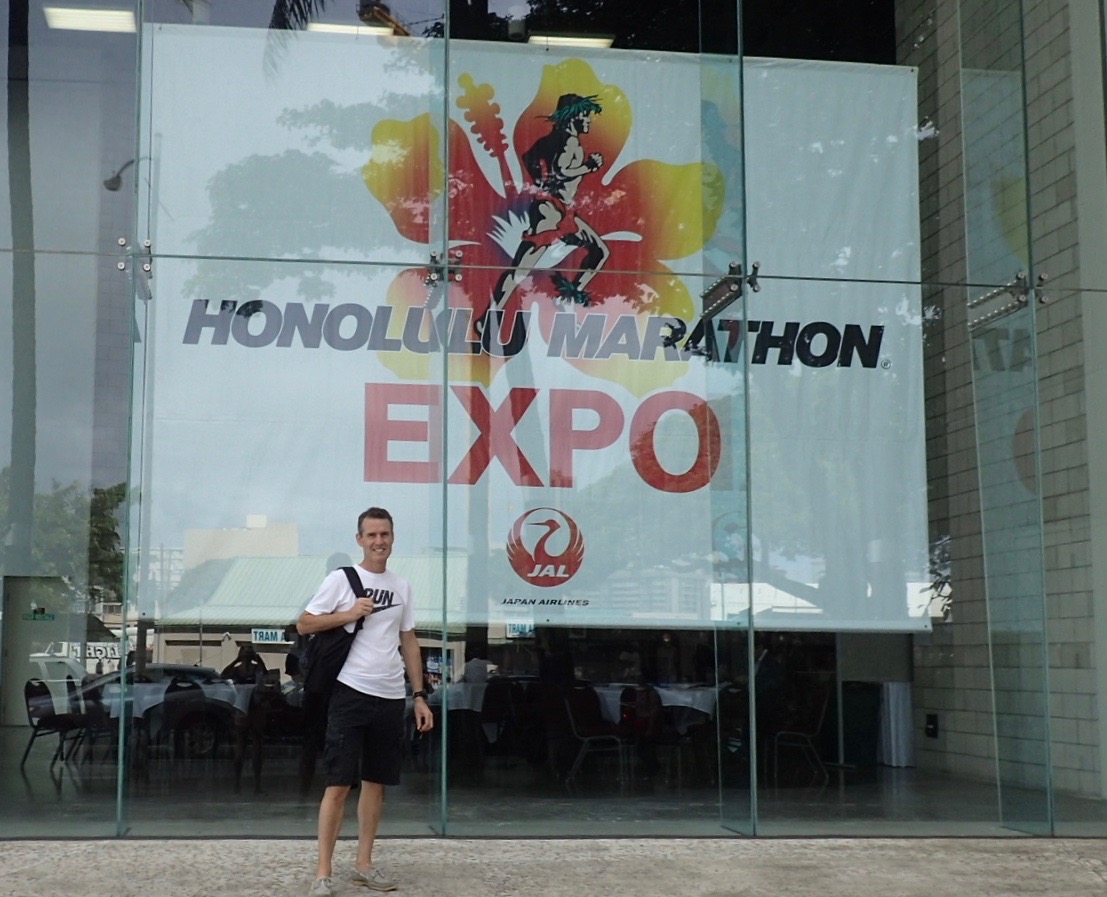 After getting our stuff, we wandered towards the beach, and strolled along in the direction of Diamond Head. Before we knew it, we had spent 4 hours walking. Way too long the day before running 26 miles! But Honolulu is a nice city with some stunning views and locations. Very easy to keep walking on to the next attraction! 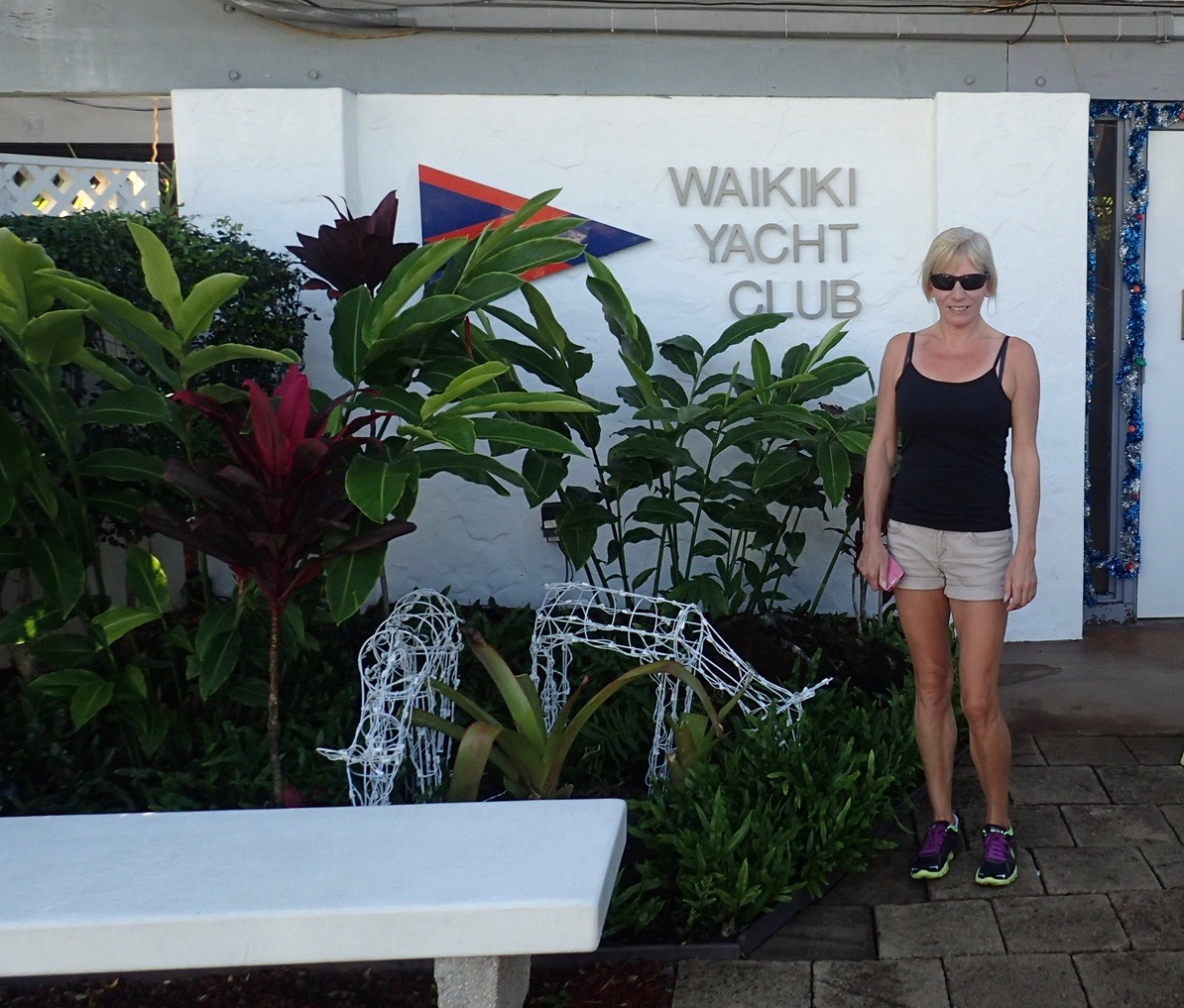 So we then caught the bus back to our AirBnB,  carrying all our race goodies, with tired feet.

Then we remembered that we had to take our drop bags with dry clothes to the finish area in the afternoon. So we packed up a few spare T-shirts and shorts, and took the bus to the finish area, in a big grassy park. Checking our bags into the Drop Bag area was quick, easy and efficient. The staff were friendly and helpful. I'm starting to REALLY like Honolulu!

The race starts at 05:30 am, and you need to get there by 04:30am. So we had to be up and awake at 03:00am to have some breakfast, and phoned for a taxi at 04:00am. The taxi driver wasn't at all surprised to pick us up so early - in complete darkness! He was able to drop us off quite close to the start area - about a 20 minute walk - which was good as it had started to rain.

The start area is on Ala Moana Boulevard, next to Ala Moana Beach Park. There are lots of porta-potties on the grass and plenty of room to move around.  Ala Moana Boulevard itself seems like a wide road, until you pack in 30,000 runners! Then it gets a bit congested.

Once near the start area, we put on our black bin liners to help keep us dry and a little warmer as we waited for the start. There were very long queues for the porta-potties.

Finally the start - in darkness and light rain, but there was a great firework display to light up the night sky! The first few miles is run through relatively narrow roads, and there was some congestion and jostling between runners. There were also a lot of marathon walkers doing the event, and most of them seem to have started in front of us, as we had to make our way past them!

There are no corrals to divide runners into groups according to time. 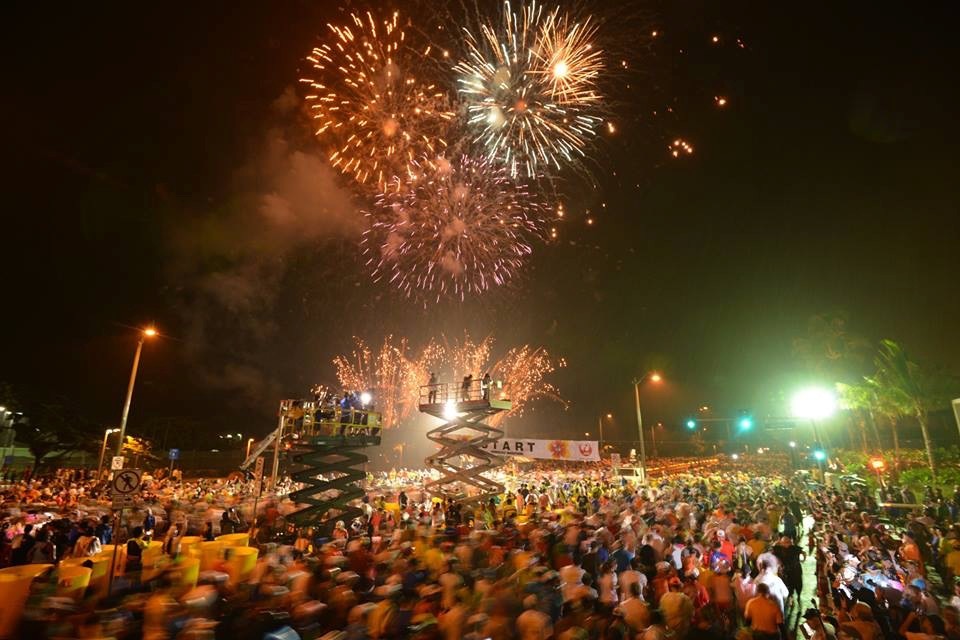 Fireworks at the start.

The next 2 hours were run in darkness through the city, with light rain continuing to fall. Eventually we could see the skies beginning to lighten as dawn approached, and we headed out towards Diamond Head and out into the countryside.

After the hill climb up Diamond Head and descending down again, we were running through mostly suburban streets. I had been expecting some nice sea views, especially at dawn, but we only got a few glimpses of water, and the clouds obscured most of the views. The course was mainly flat with only a couple of moderate inclines - except foe Diamond Head, which seemed reasonable on the way out but somehow much steeper on the way home!

The final few miles is on the coastal road, and finally I had my views of the ocean! The rain had stopped, the sun had come out, and more locals had appeared at the side of the road to cheer.

At one point we saw several guys with a big table and lots of drinks - an unofficial energy station - and he was shouting "free beer". I thought I was hallucinating, until Mogsy tried the small cup, to confirm it really was beer! It was only a small cup - just a mouthful - but very welcome. 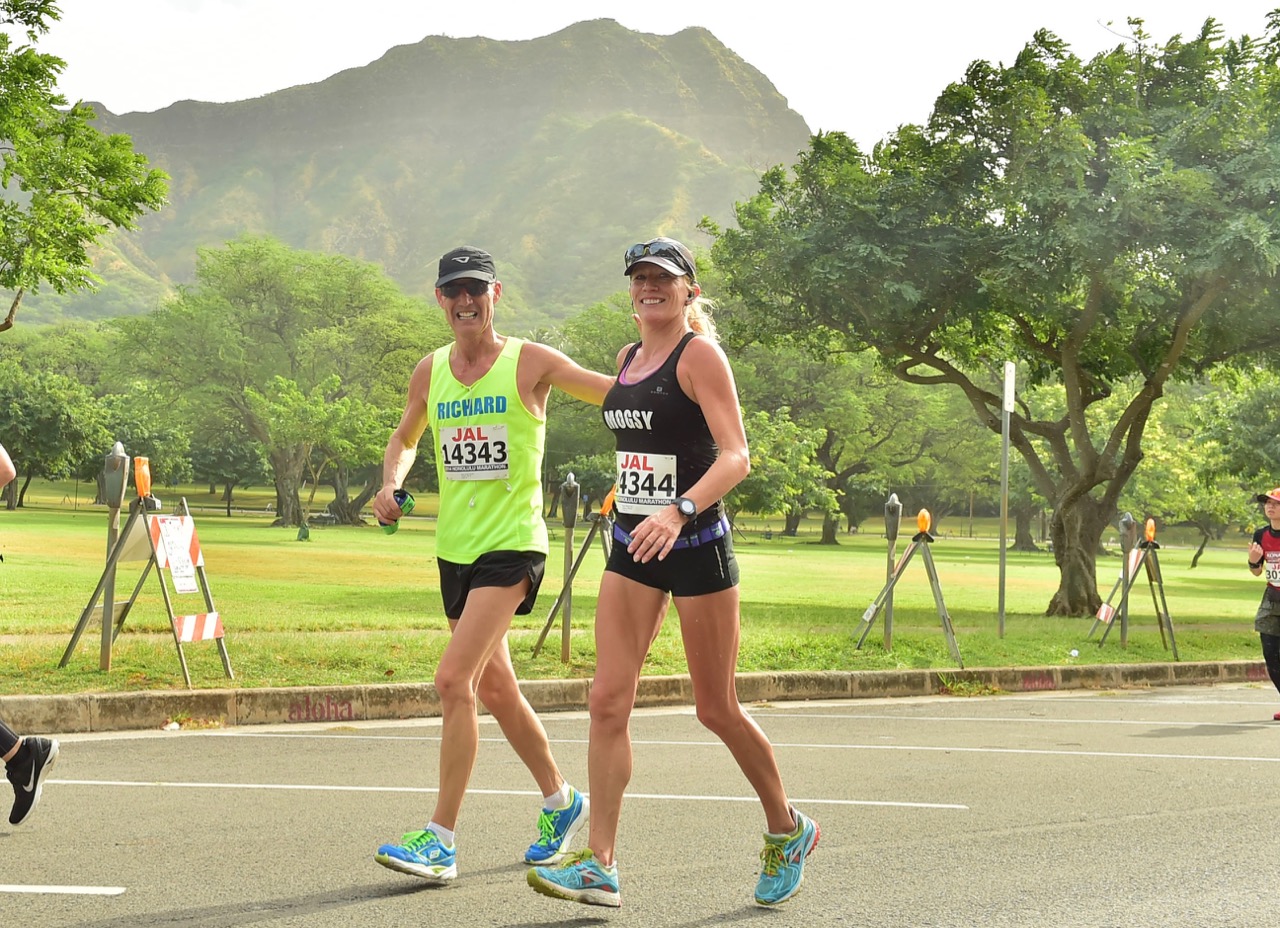 Approaching the Finish, with Diamond Head in the background

And so we continued our descent down towards the finish area, with a flat run home. Once over the line, we received our finishers medals quickly, and made our way through into Kapi'olani Park, a large grassy area with lots of open space for the refreshment area, where we could get water, sports drinks, and a local doughnut called a malasada. Lovely!

The finish area is only a few minutes from the beach, and many runners walked along there and cooled off their tired legs in the ocean.

But I was exhausted, and we picked up our drop bags with dry clothes in them, and were fortunate to find a taxi quite quickly to take up back up the hill to our hot tub!

Once home, we grabbed a couple of beers and sat in the very hot tub, grateful for the heat on our tired legs.

So, how would I summarize our Honolulu marathon race review?

Obviously, it's not just round the corner - unless you live in Hawaii. So there's some traveling to get there. My advice is to spend a little more for comfortable flights, and allow several days to settle in and acclimatize.

Next, accommodation is easy to find, and cheaper if you stay out of the downtown area. It's easy to get around on the buses, and taxis are not too expensive if you're in a hurry.

The city of Honolulu itself is absolutely stunning - it really is just like being on the set of Hawaii 5 0. So the location is definitely worth the visit. The cost of living is higher than on mainland USA, but we found we could keep costs reasonable by making economical choices.

One thing you must not miss - have a cocktail at Duke's Canoe Club on Waikiki beach at sunset. Totally awesome, totally city-tropical. And all the local people we came into contact with were super-friendly, and very helpful. 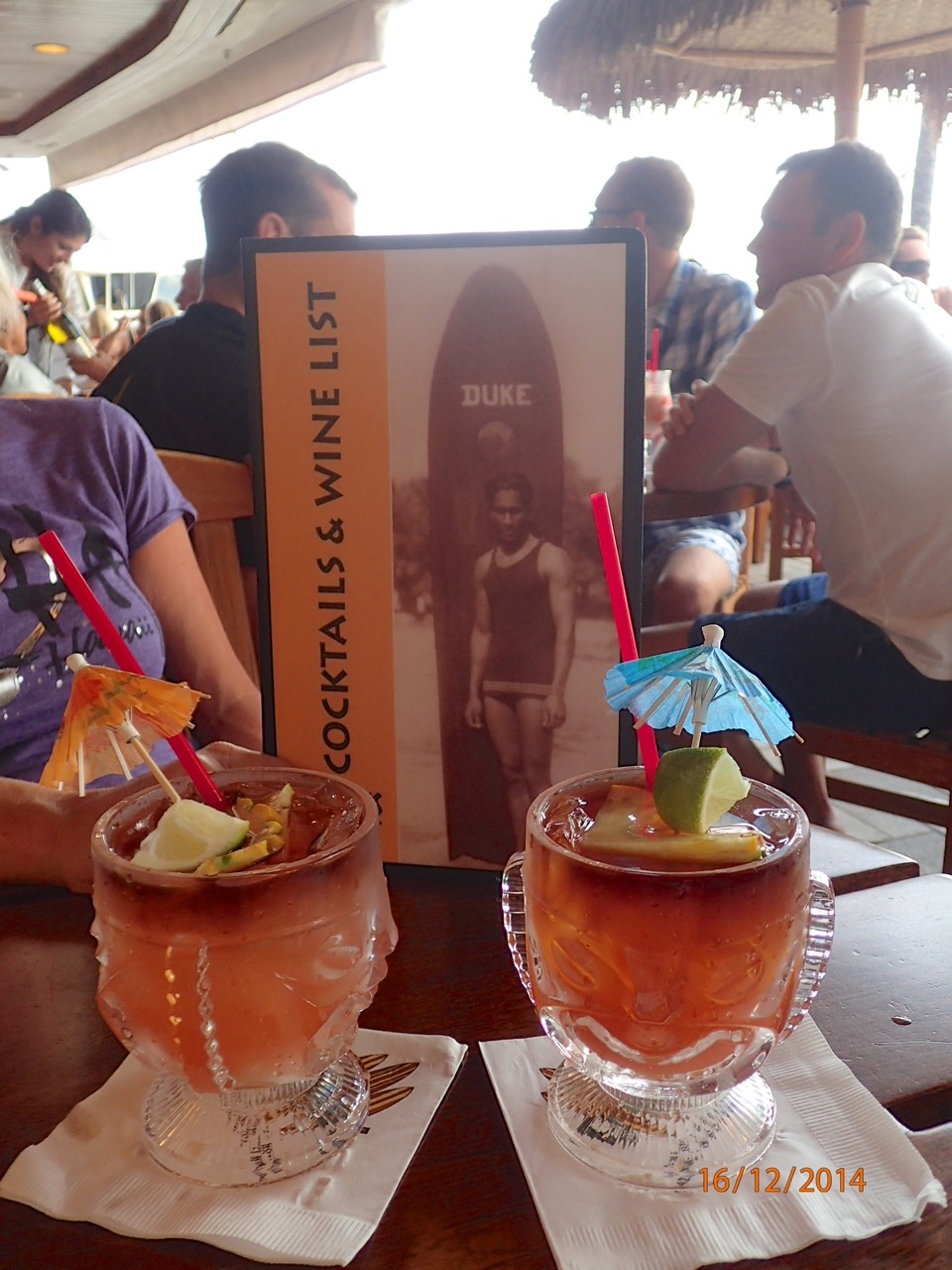 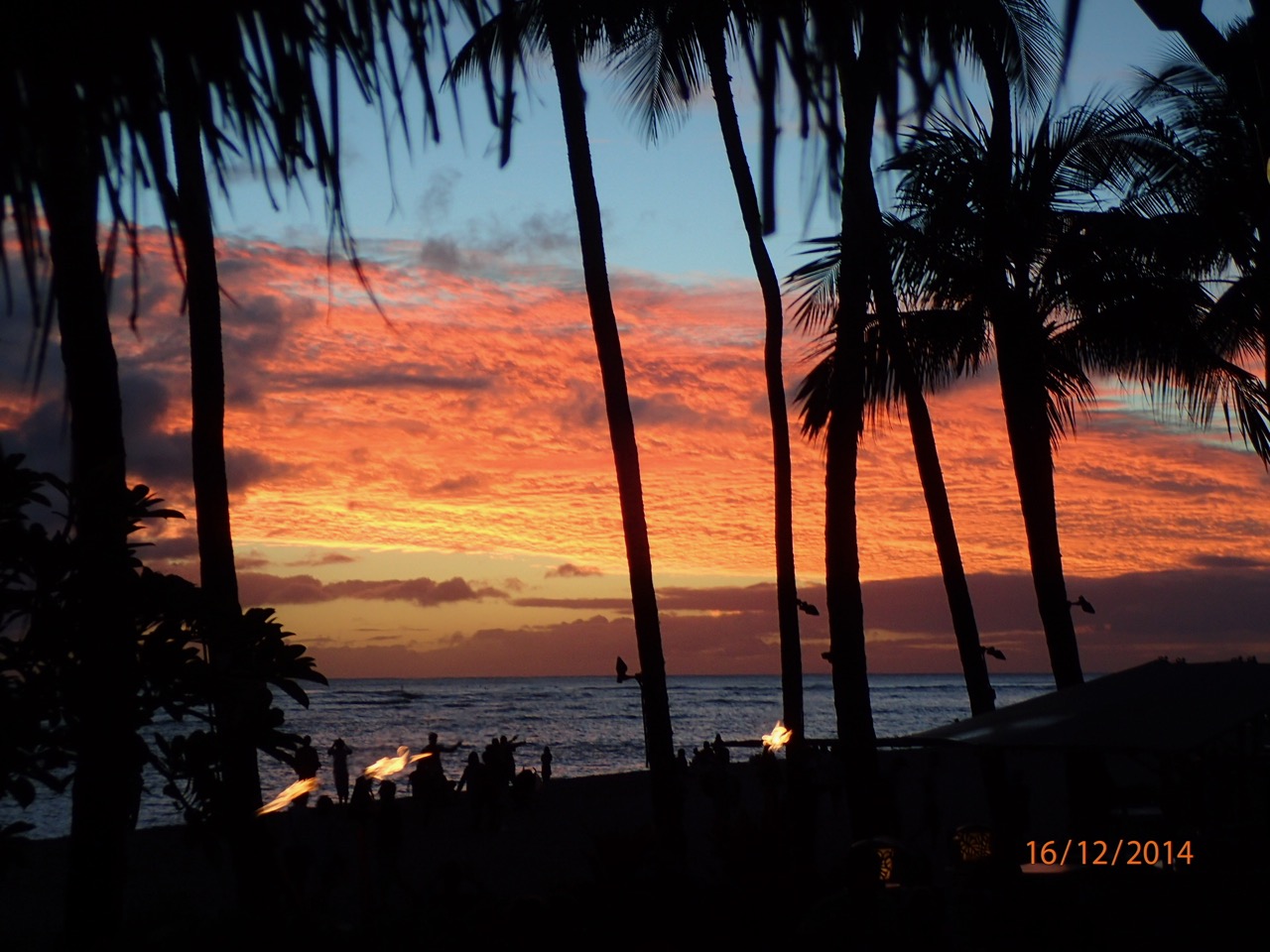 The marathon course itself is not particularly scenic or enjoyable. While there are some great views, and the course itself is relatively flat, it's not a spectacular course, like Big Sur marathon in California. Because of the early start, almost 2 hours is run before sunrise, and I didn't really enjoy that aspect.

I would say that the Honolulu Marathon is NOT ideal for your first marathon, NOR if you want to have a go at a Personal Best time. But it's a good choice for a tropical marathon in a great location! I recommend staying on an extra week for sight-seeing.

The overall organization is fantastic, and the whole event ran smoothly - as far as I am aware personally! 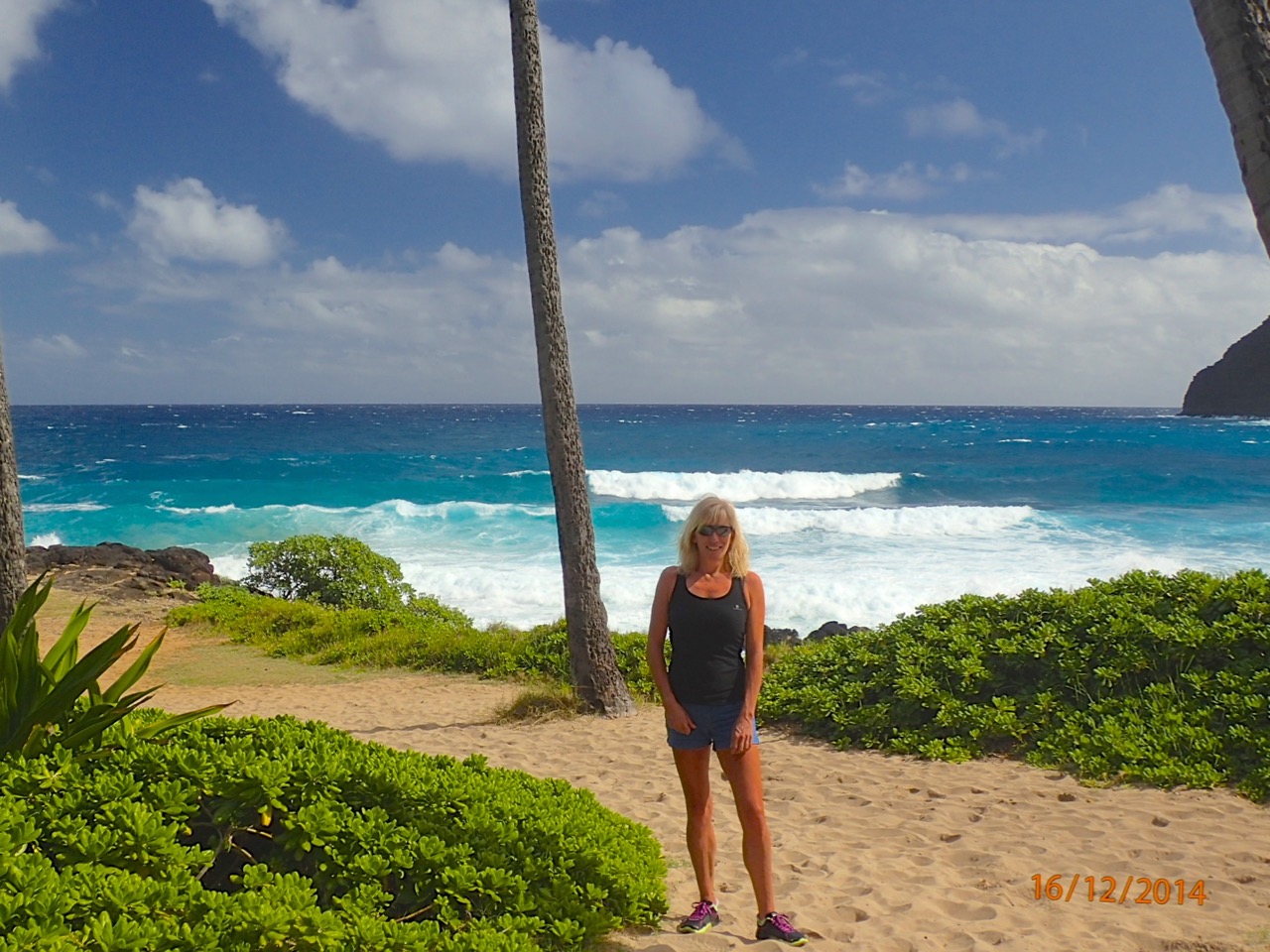 Would I do the Honolulu marathon again?

Absolutely! But I would get better flights and allow more time before the race. Otherwise I wouldn't change a thing. I hope this Honolulu marathon race review has been useful.

Please contact us if you have any questions. We firmly believe that training for a marathon or a Half marathon is excellent for building endurance!