Our Seville marathon race review dates from 2015. Sevilla (as it is known in Spain) is a relatively flat city, promising the chance of fast times as well as running past some historic architecture. And it finishes in the old Olympic stadium, for a touch of pizzaz at the end!

We only entered this race after running the Honolulu marathon 8 weeks before. We had done a load of training, but Richard was disappointed with his time in Hawai'i, at 4:59:59.

We realized that we still had the training in our legs, plus the actual marathon itself, and it seemed to make sense to have another go, just so Richard could see if ALL marathons really were as bad as Honolulu!

For us, getting there was relatively simple. We live halfway between Alicante and Valencia airports, but Valencia had the better flights direct to Sevilla. If you are coming from overseas, you will probably enter Spain through Madrid, and there are direct flights (or the high-speed AVE train) from Madrid to Sevilla.

This is very reasonable, as this is not a BIG international event. Nevertheless, there are around 11,000 runners, so it's a decent sized field!

For the one and only time, we elected to go through a company that arranged the race entry, bib collection, accommodation, and transport from airport to hotel and from hotel to the race and back. It worked out very well, but had a few aspects we were not used to - read on!

We were initially booked into a hotel near the race start, but in typical Spanish fashion, plans changed at the last minute, and we found ourselves in a different hotel, further from the start!

We didn't mind, as the hotel was definitely nicer than the original, AND we were nearer the center of the city.

Our host who had collected us from the airport delivered us to the hotel, near the AVE train terminal, and took care of the check-in formalities. The room was definitely nice, with large en-suite bathroom, a BIG bed, and plenty of room to lay out our marathon gear for the next day.

We decided to order room service breakfast on race day, as we wanted to eat before the hotel dining room opened. We had brought a few things ourselves, but wanted fresh coffee, orange juice and some croissants too! We were taken a little by surprise when the door bell went, and instead of the tray being left outside the door, the guy came straight into the room to put the tray down on a table - and we were only half dressed! The waiter seemed oblivious, and wished us a Good Day on his way out.

Picking up your race number.

As mentioned, we used a marathon service agent this time around, so we didn't have to go to collect our bibs and race pack - he did it for us. This was a great service, and saved us a lot of legwork the day before the race.

On the downside, we didn't get to see the race expo, AND Mogsy's race jacket (a freebie in the race bag) was too big, but she couldn't exchange it. A small thing, but a little frustrating.

The start time was listed as 09:30 am. True to his word, our host was at hotel reception at 08:30 to pick us up and take us to the start. We had been in reception 10 minutes early, not quite believing that we could get to the start in time.

Our host drove us through the city, chatting away, with his wife alongside. We were getting nervous as we got close to 09:00am and we still couldn't see the stadium.

At 09:05 we pulled into the car park, and bundled our drop bags out of the car trunk. We couldn't believe how close the guy was cutting it before the start! Then we hung around for another few minutes while his wife pinned her race number onto her top. She seemed totally unconcerned about the passage of time and the imminent start. "Is she racing?" I asked our host. "Sure", he replied. "She's going to try for a sub-3 hour race".

Stunned, we followed her meekly around the back of the stadium to the bag drop area, which was VERY efficient. Then we made our way towards the start boxes. Everyone else had already gone though, so we found ourselves almost at the very rear, and all the porta-potties were free, so we took advantage of a final rest-room break before the start.

Finally we were in the start pen with only 5 minutes to go. Great! I hate waiting around in a crowded start pen before a marathon. This was PERFECTLY timed! 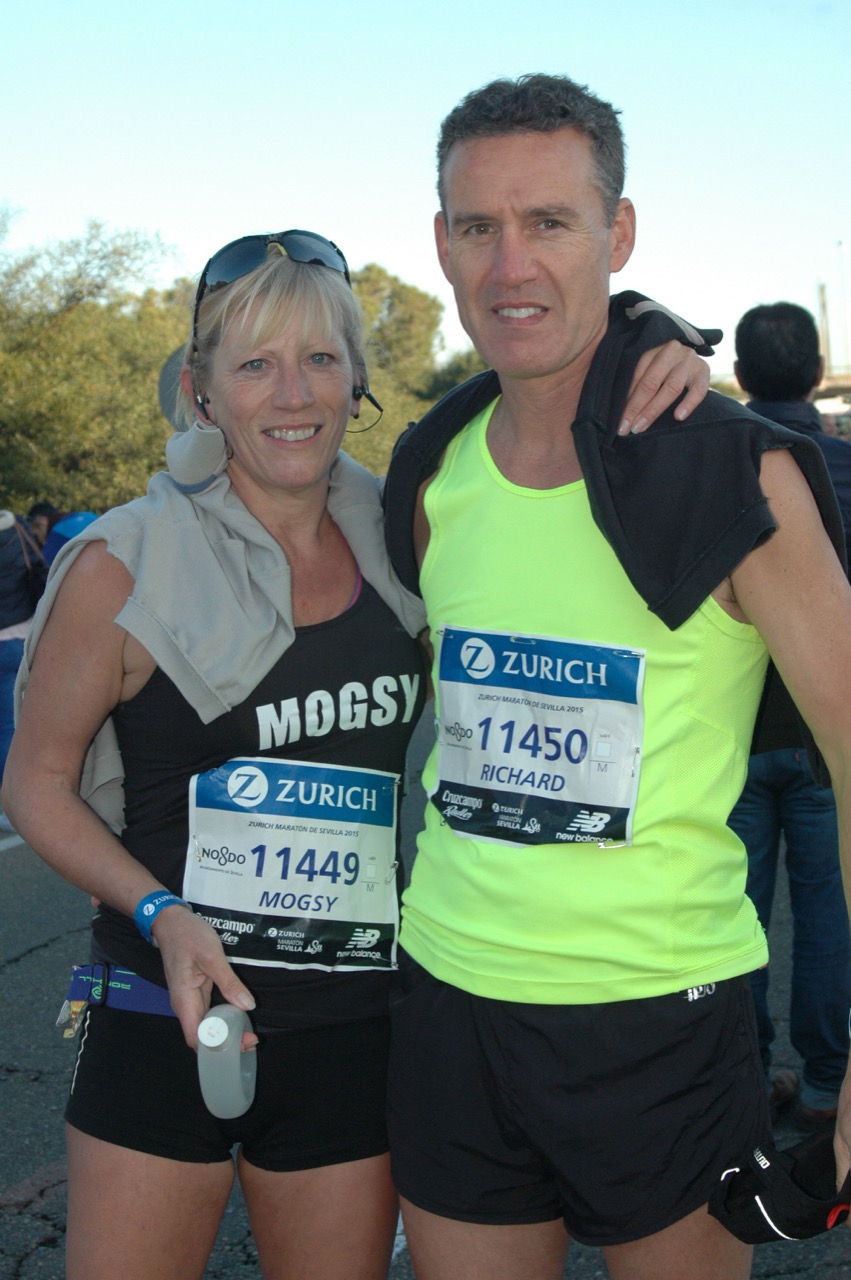 Just before the start!

Finally we heard the start, and set off with the back markers. When we looked at the Start video the following week, there were only about 30 runners behind us as we crossed the line. Out of 11,000. We were definitely at the back, with a few baby strollers and dog walkers/runners!

We set off at a moderate pace, remembering Richard "hitting the wall" in Honolulu. We definitely wanted to go easy in the first few miles! Gradually, we passed a few dogs and a few baby strollers, and our legs were getting into the groove.

As we approached 5 miles, however, Mogsy declared that she needed to find a Lady's Comfort Station rather quickly; fortunately, in Spain, you can just go into any bar or restaurant and make use of the restrooms. As we approached the next bar, Mogsy headed for the door. As she went in, in full race gear with a marathon bib, the locals waved her through and insisted she went to the front of the queue for the restroom!

Meantime, Richard was out front on the street, stretching and fretting about passing time, when he noticed the official race porta-potties over the street - and one of them had a balloon on a string coming out of the door with a "4:30" written on it. It was the 4 hour 30 minute pacer! 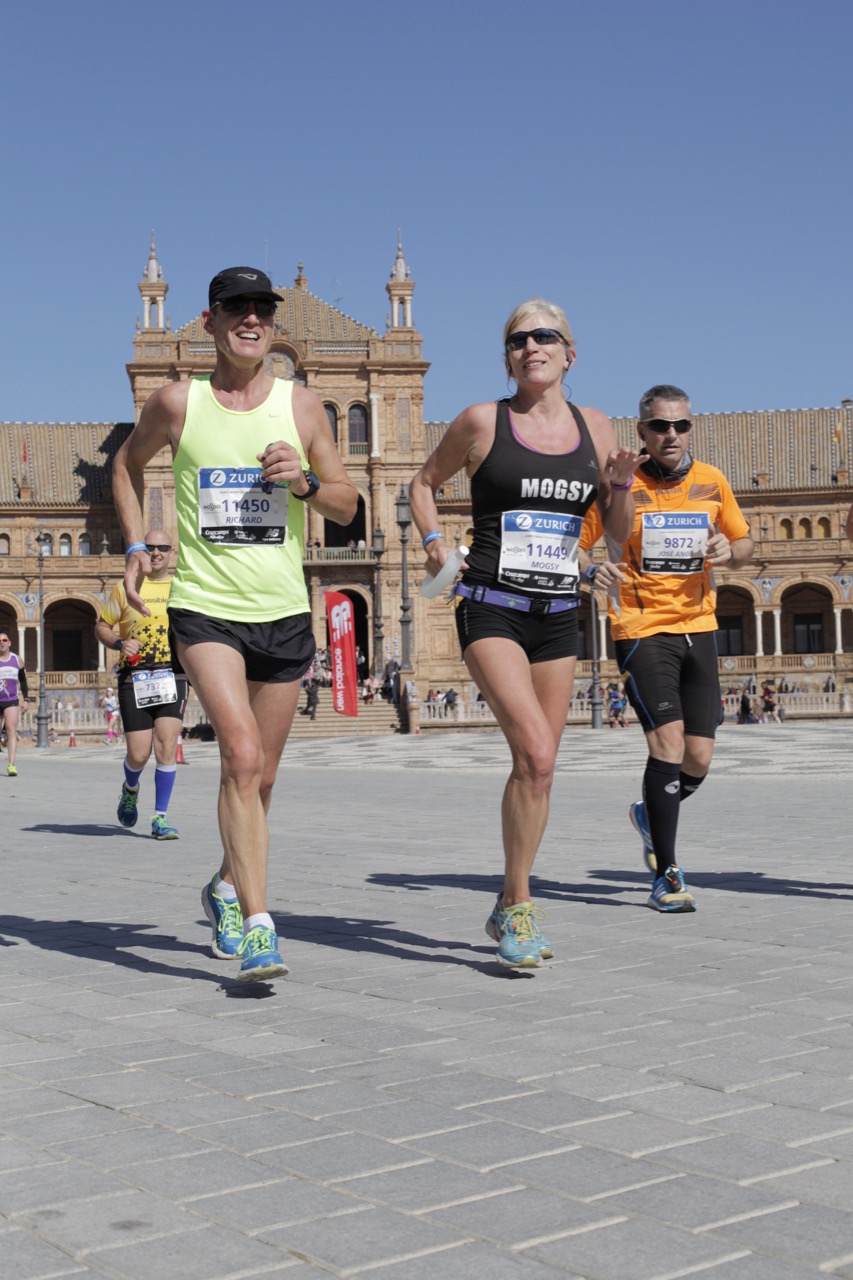 Running through the last 5 miles!

Finally Mogsy re-appeared, and we set off in pursuit of the pacer. Within about 15 minutes we had caught up, and followed in the crowd surrounding him. We felt the pace was a little slow, and it was very busy with runners bunching, so we decided to up the pace slightly and edge out in front of the 4:30 pacer. Brave stuff!

The water and energy stations were well-supplied, even for the back-runners like us. We had a gel every 5 miles, and took on water in our own water bottles at every chance.

The course opened out into several long straights, with nothing much to look at, but it was all FLAT. We felt OK, and kept up our pace, gradually opening a gap on the 4:30 pacer.

Around 3 hours we both decided it might be good to have another rest-room break. We kept an eye out for official race Porta-potties, but none came into view. Eventually we noticed a football ground with changing rooms, off on the left side next to the course, and we elected to dive in and take a chance we could find the rest-rooms. Luckily, we almost ran straight into the Ladies and Gents facilities, and we were out again within 2 minutes.

We could see the 4:30 pacer approaching, so ran back onto the course smartly and resumed our race pace. The final hour of the race took us through the best and most attractive parts of Sevilla, and then through the center, with Sunday morning strollers sometimes getting in our way 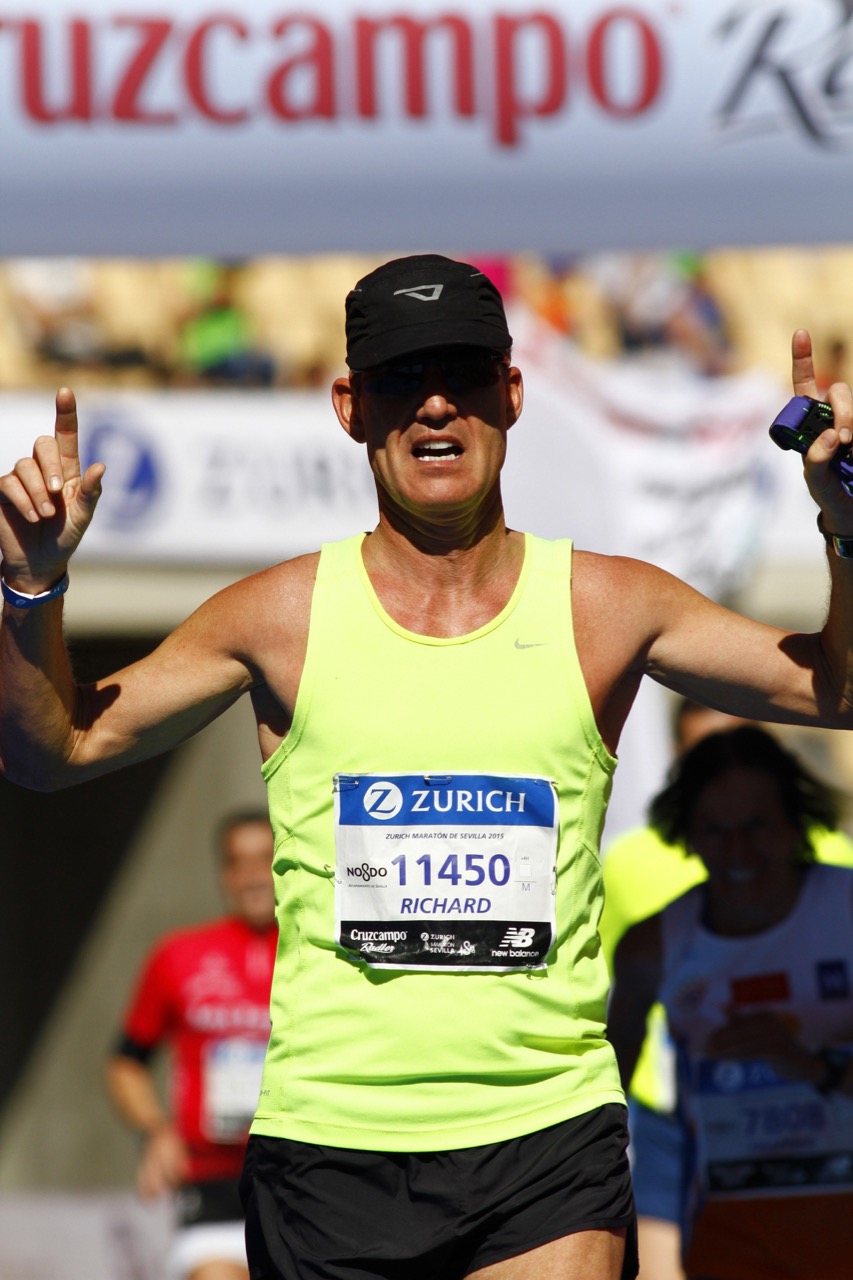 Richard at the finish line!

We were on a buzz now, and Richard had a dose of "second wind", and started to pick up the pace in the last few miles. Mogsy fell back a bit at first, but then decided to follow suite, and gradually caught Richard up, as we passed fellow runners hand over fist.

Approaching the old Olympic stadium, Mogsy passed Richard, and set off for the tunnel into the stadium itself. Richard followed as best he could, but the sudden dark in the tunnel after the bright light was unsettling, and coming out into the stadium, he could see Mogsy about 100 meters ahead already.

Running around a lap of an Olympic stadium is something magical - you can imagine yourself at an Olympic Games, with the crowd on its feet, roaring you home. Richard felt like he was flying, overtaking runners with every step, but Mogsy had opened an even bigger gap, and was out of sight.

As Mogsy finished, she looked around, thinking Richard was just behind. But he was over half a minute behind! And we both achieved personal best times - 4 hours 26 minutes dead for Mogsy with Richard 30 seconds off her pace.

We were around 7000th finishing position, so we had passed about 4000 people during the race.

We got our medals at the finish line, had a race photo taken, and were directed down the tunnel with plastic blankets. We collected our drop bag - all VERY efficient, and headed outside to the huge grassy banks outside the stadium, full of fellow runners. 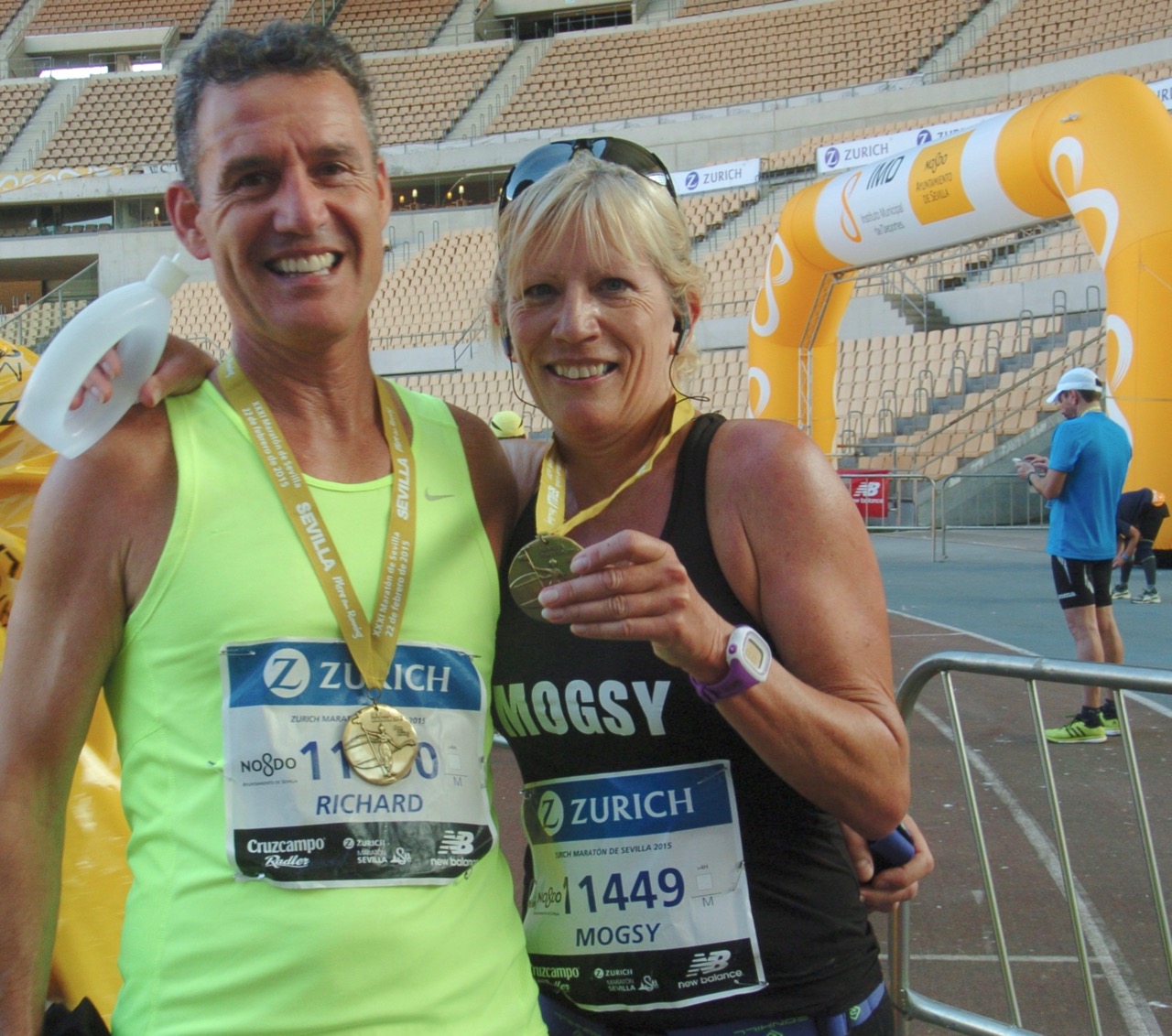 At the finish with our medals

We had packed some home-made energy bars and beers in the drop bag (only in Spain!), and sat on the grass, in the sun, with our supplies and medals, and a sense of achievement after our personal best times. After about half an hour, it was time to move and find our host for the pick-up and ride back to our hotel. This is where things went slightly wrong.

He wasn't an "official" race organizer person/company, and so the police wouldn't let him in near the stadium itself. So we had to walk out of the stadium precinct, and along some nearby streets, to get to where he was able to drive. Fortunately we had seen his wife, and she was in phone contact with him.

FINALLY we were back at the hotel, and it was into a hot bath with a glass of wine!

Not many, really. Just getting used to the Spanish habit of turning up at the last minute, and taking it easy! Also, this is not a particularly attractive race visually. The first 30 minutes and the last hour are definitely the best bits; the middle is made up of long, boring straights along suburban roads - BUT it is all FLAT and great if you're going for a fast time.

Cost of being in Sevilla

This is NOT an expensive town, if you avoid the fancy restaurants. Taxi fares, drinks and simple meals were all reasonably priced for Spain, which means you'd probably find it cheap if you're coming from just about any other country! The hotel we stayed in was a 4 star, and had a very nice breakfast buffet which included a few of Mogsy's favorites, like smoked salmon and scramble eggs!

We found this to be a well-organized event, with a slick bag-drop system, plenty of porta-potties at the start and en route, water stations every 5km, and an atmospheric finish. The race course is flat and fast, and wide enough the whole time to avoid jostling with fellow runners, except for the final few miles through the central shopping area, where the course narrows and shoppers wander out in front of you!

We would definitely do the Sevilla Marathon again!