The London Marathon race review here is based on Mogsy's experiences at running this event twice - and shaking hands with Sir Richard Branson at the finish! The London Marathon is one of the World's great marathons, attracting a huge number of runners - around 50,000. 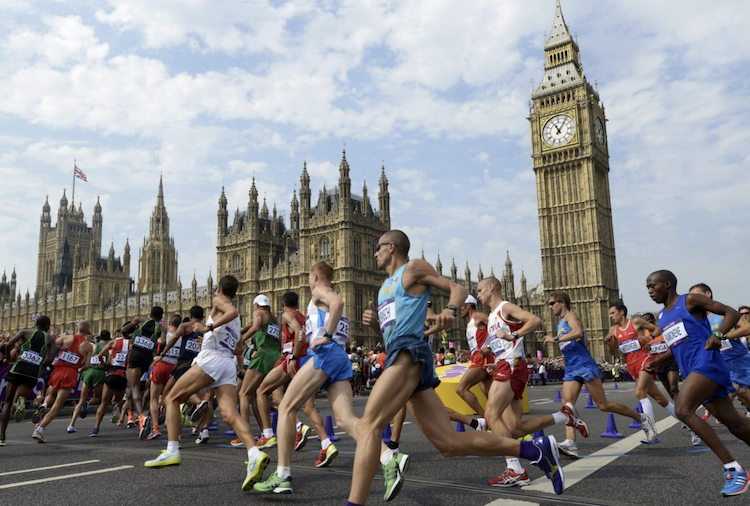 Passing Big Ben and the Houses of Parliament

The route of the London marathon is pretty much the same as it was back in 1981, when it was first organized by Chris Brasher and John Disley.  Brasher is also famous for being one of Sir Roger Bannister's pacers when he ran the first sub-four minute mile in 1954.

The race starts in Greenwich and heads east towards Woolwich, before doubling back along Trafalgar Road and heading back to Greenwich and passing the famous tea clipper the Cutty Sark.

The route continues along the South side of the Thames through Rotherhithe and Bermondsey before crossing the river at Wapping, running over the iconic Tower Bridge. Runners then turn right Eastwards again, and take in a big loop on the North side of the Thames past Canary Wharf, then back West past Tower Hill and along the Victoria Embankment.

The last mile and-a-half is surely one of the most iconic finishes of all world marathons - passing the London Eye on the opposite bank of the Thames, turning right at Westminster Bridge, past the Houses of Parliament on your left, and towards Buckingham Palace. The final section goes along the South side of St. James' Park, directly towards the gates of the Palace, before the last right turn into the Mall and the run to the finish! 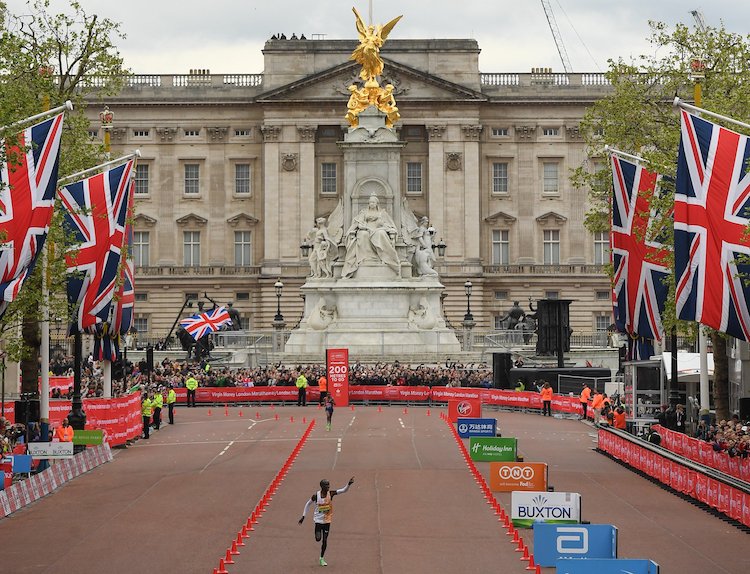 Entering The Mall, in front of Buckingham Palace

How do you enter?

First of all, you have to be 18 years of age or older on the day of the race. There are several ways you can take part in the London marathon:

How do you get there?

International visitors; If you are coming from overseas, most major airlines of the world fly into London Heathrow airport (LHR) or London Gatwick airport (LGW).

European visitors; If you are flying from Europe, you also have the choice of several other airports near London: Stansted airport and Luton airport.

Within the U.K.; The best options are usually train or coach into central London.

If you think you would rather be near the finish, then you want to be more west, near Green Park or The Embankment. This means that you have a bit of a longer trip on the morning of the race, but an easy trip back to your accommodation afterwards. This is especially welcome when you are tired, and maybe wet and cold! Mogsy preferred to be near the finish on both occasions.

Getting to the start.

Most runners will use the London Underground service (the 'Tube'), but be warned - it's very busy and the carriages are packed, in spite of Transport for London (TfL) laying on extra trains! Bear in mind that a lot of charity runners are dressed up in costume, and sometimes the costumes take up a fair bit of space in the Tube compartments.

You should get the Tube to Greenwich Underground station, and then it's a 20- minute walk to the starting area. There are marshals directing you, but just follow all the other runners!

One bonus is that the Tube is FREE for all marathon competitors.

We're off! The atmosphere.

Because there are so many runners (over 50,000) in relatively small spaces, the run is held in 'waves'. The elite runners start first, followed by sections according to your estimated finish time.

The atmosphere is awesome! Everyone is buzzing with excitement, no matter which time group you are in.

Getting through the race - highlights.

Like any marath0n, this is a long slog. The worst part is through Docklands, and past Canary Wharf.

The finish is simply amazing. After running past Buckingham Palace and down the Mall, you almost feel like Royalty! You get your finisher's medal and a heat blanket if it's cold. Then it's on to the bag drop collection area to pick up your bag, and then onwards to make room for the runners coming in behind you.

It's a bit like a conveyor belt, but with 50,000 runners, there's no other way to do it, like any major city marathon.

This is one of the world's greatest marathons. Unfortunately it is also one of the hardest to get an entry into. The best option is to go for a charity place, but you have to be sure of raising a certain minimum amount of money for that charity.